More than 150 protesters gathered near the Ferguson Police Department on Sunday evening to demand the arrest of Darren Wilson, the officer who fatally shot unarmed teenager 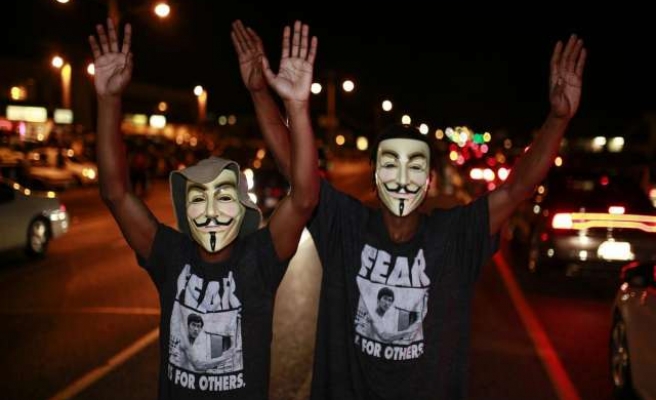 Police were seeking suspects on Sunday in apparently unrelated shootings of two police officers in and near the Missouri city of Ferguson, and arrested seven of those protesting last month's shooting death of a black teenager by a white police officer.

The Saturday night shooting of an officer in the St. Louis suburb of Ferguson did not seem linked to protests elsewhere in the city, police said, nor to a separate shooting involving an off-duty police officer in St. Louis early on Sunday.

Neither officer received life-threatening injuries and no arrests have yet been made over the two incidents, according to the St. Louis County Police Department.

More than 150 protesters gathered near the Ferguson Police Department on Sunday evening to demand the arrest of Darren Wilson, the officer who fatally shot unarmed teenager Michael Brown on August 9.

Police said a total of seven demonstrators were arrested at the site, with five arrests coming after a tense standoff when several water bottles were lobbed at officers on Sunday night.

On Saturday, an officer had seen a man in the rear of the Ferguson Community Center at about 9 p.m. The man ran, then turned and shot the officer in the arm, said Schellman.

The officer, who was treated at a local hospital, returned fire but apparently did not hit the suspect, who disappeared into a nearby wooded area, Schellman said.

It was not clear if the officer was targeted or the shooting was random, Schellman said. The officer, who was wearing uniform trousers but not the uniform shirt, did not return fire, the sergeant said.

The apology did not sit well with some. Many in Ferguson, a mostly black community of 21,000, have said Jackson should be fired for what they saw as a heavy-handed response in the aftermath of Brown's killing.