Mourn After Young Muslims Gunned Down 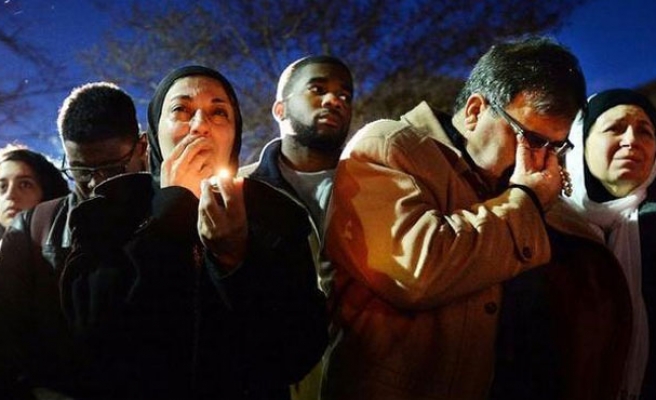 More than 2,000 people attended a vigil at the University of North Carolina at Chapel Hill on Wednesday to mourn a dentistry student, his wife, and her 19-year-old sister, who authorities said were fatally shot by a neighbor motivated by an ongoing dispute over parking spaces.

But the stories and remembrances were told amid a cloud of doubt from the families of those slain, who believe all three may have been killed because they are Muslim. Authorities have said they have no evidence that the killings were motivated by any bias other than rage.

"We understand the concerns about the possibility that this was hate-motivated, and we will exhaust every lead to determine if that is the case," Blue said in a statement.

The shootings of three Muslim students near the University of North Carolina campus "are not part of a targeted campaign against Muslims," U.S. Attorney for the Middle District of North Carolina Ripley Rand told reporters on Wednesday.

An attorney representing Hicks' family said Hicks had problems with many of his neighbors and that the three slain "were there at the wrong time and the wrong place."

"If, and it is quite possible, that this was an act based off of evil and a scared ignorant man, do not let ignorance propagate in your life," Farris Barakat, the brother of the slain dentistry student, Deah Barakat, told the crowd.

Members of the Muslim community and others expressed shock and sadness as news of the triple murder spread. On Twitter, notes of condolence and outrage sent the #MuslimLivesMatter hashtag trending nationally.

The relatives of the victims began their own Facebook page to thank supporters. "Thank you for your prayers. Our families aren't shouldering the burden alone. So much support has poured in from so many great people," one post stated. "Many, many amazing people have condemned this crime from across the world including many random people who seem to want to apologize for the heinous acts of this man. Muslims know all too well that the actions of few may not define the masses. Love shall overcome."

“3 Muslims were gunned down today in Chapel Hill, NC: Prayers going out to the victims and family of those mudered in ‪#‎ChapelHillShooting. [Inna lillahi wa inna ilayhi raji'un] May God have mercy,” Imam Webb added.

“The #ChapelHillShooting in #NorthCarolina is totally unacceptable. Such incidents should be condemned and given appropriate media coverage,” Mufti Ismail Menk tweeted.

“A crime against humanity. The victims of the Chapel Hill shootings were all killed execution style,” Abdullah al Mamun, who identifies himself on Facebook as a senior member of the Muslim Ummah of North America (MUNA) posted on Facebook.

“Please keep them in your prayers. This just happened few hours ago. I am shaken to the core.”

“It is with great sadness and a heavy heart, that we must relay the news of our Dear Brother Deah Barakat, his wife Yusor Abu-Salha and her sister Razan Abu-Salha, were found shot and killed execution style, in their home earlier today,” the two Muslim brothers said in a post.

“Young Muslim College kids. They were gracious host to us on our trip to North Carolina and made us feel at home. It was the only speaking engagement on our trip, we didn’t wear a suit and tie,” they added.

Barakat is an American football and basketball fan.

He is believed to be a dental student at the University of North Carolina and volunteered with a charity providing emergency dental care to children in Palestine.

The football players prayed to the victims who used to collect donations to the needy people.

“They were beautiful people not just in appearance but in deeds. Our Brother Deah’s last FaceBook Post was of him feeding the homeless. Alhamdulillah,” the post added.

“In Shaa Allah justice will be served. Please make duaa for them and their families. May Allah grant them Jannahtul Firdaus and may they be among the 70,000 who enter Jannah without reckoning. Ameen.”

Since 9/11, American Muslims, estimated between six to seven million, have become sensitized to an erosion of their civil rights, with a prevailing belief that America was targeting their faith.