Protest leaders expressed horror at the killings, saying they could not be held responsible for the actions of a man described by city officials as emotionally troubled. 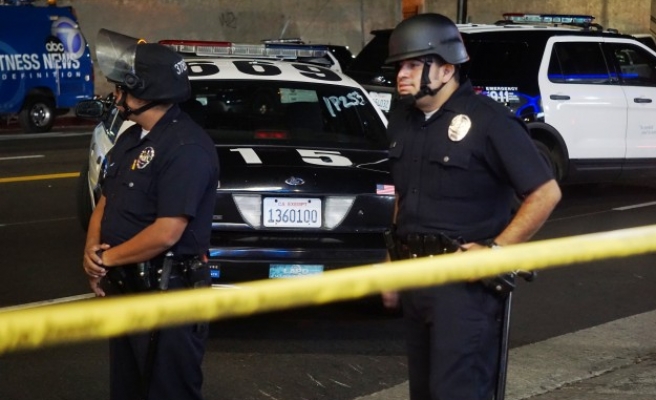 Police officers in dress uniform and other mourners joined a somber, four-block line outside a New York City church on Friday for the wake of one of two officers shot by a man who said he was avenging the killing of unarmed black men by police.

Rafael Ramos and Wenjian Liu were slain last Saturday afternoon while sitting in their patrol car in Brooklyn.

Singled out because of their uniforms, their deaths have become a rallying point for police and their supporters around the country, beleaguered by months of street rallies by protesters who say police practices are marked by racism.

Draped in the New York Police Department's green, white and blue flag, Ramos's coffin was carried into a church in his Queens neighborhood by police officers as colleagues from his Brooklyn station house stood saluting.

Ramos, 40, had been on the force for two years and was raising two teenage sons with his wife, Maritza.

"Dad, I'm forever grateful for the sacrifices you made to provide for me and Jaden," his son Justin said in an emotional voice during a memorial service held after the wake, projected on a large screen in the streets outside. "He was my absolute best friend."

Ramos's funeral came at the end of a week during which heated rhetoric and blame marked a city that had largely escaped some of the more violent outbursts seen in six months of nationwide protests against police use of force.

In extraordinary scenes at the hospital where Liu and Ramos were taken on Saturday, police union leaders, angered by Mayor Bill de Blasio's qualified support of the protesters, said the mayor had "blood on his hands". As the mayor arrived at the hospital, some officers turned their backs to him in a pointed display of disrespect.

Two days later, a visibly angered mayor chastised some journalists at a news conference for what he called "divisive" coverage, while urging activists to halt demonstrations until after the police funerals. Activists denounced the request as suggesting they were partly to blame for the deaths. Small groups of protesters continued to take to the streets chanting "How do you spell murderer? NYPD" and other anti-police chants.

The mayor, who attended Ramos' wake briefly toward the end of the service, has said he hopes the funerals will help mend the city's fractured mood.

A banner carried over the Hudson River behind a plane a few miles from the wake on Friday suggested not everyone was seeking unity: "De Blasio, Our Backs Have Turned To You," the message read, paid for by an anonymous group of current and retired police officers, according to police blogger John Cardillo.

Marta Mares, who said she only learned Ramos was her neighbor after his death, arrived at the church two hours early.

"We want to support NYPD officers because now we can see what danger they are in, especially under Mayor de Blasio," she said.

"We love you guys," a woman shouted as Bill Bratton, the city's police commissioner, headed into the church.

Police from departments around the country, including those in St. Louis, Atlanta, New Orleans and Washington, D.C., were expected to join national, state and city leaders for the funeral service at the church on Saturday. Nearly 700 officers had taken up an offer JetBlue Airways Corp to fly two members of each law enforcement agency to New York for free, an airline spokeswoman said.

Police had yet to announce details for the funeral of Liu, 32.

The execution-style killing was so swift, police said, that the officers may not have seen their assailant, Ismaaiyl Brinsley, 28, a man described by city officials as emotionally troubled. After shooting the officers, he shot himself and died in a nearby subway station. He had begun the day by shooting and wounding his ex-girlfriend in Baltimore.

Brinsley, who was black, wrote online that he wanted to kill police officers to avenge the deaths of Eric Garner and Michael Brown, unarmed black men killed by white policemen in New York and Ferguson, Missouri.

The deaths of Garner and Brown and the decisions not to prosecute the officers responsible ignited protests across the country, renewing a debate about race in America that has drawn in U.S. President Barack Obama.

Relatives of Garner joined civil rights activist the Rev. Al Sharpton on Christmas Day to say prayers for both Ramos and Liu.