Whilst in traditional mosques omwn pray separately from men, muslim women at an interfaith centre in Los Angeles listen to the sermon by Edina Lekovic, a role traditionally reserved for Muslim men. 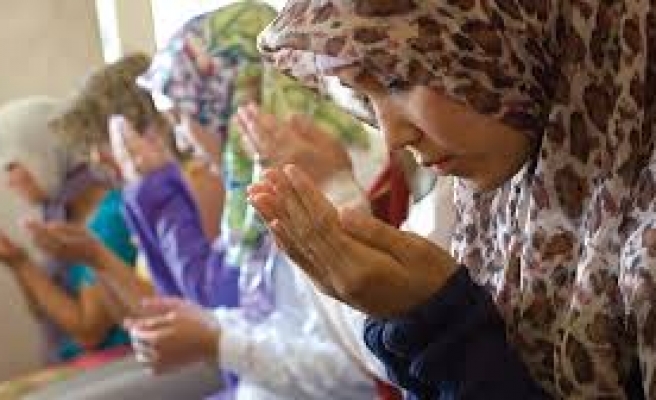 After the traditional call to prayer, Edina Lekovic stood in front of some 150 women seated on the floor at an interfaith center in Los Angeles, and delivered a sermon, a role traditionally reserved for Muslim men.

"We have the right and responsibility to our faith," Lekovic told the women as she stood in front of banners emblazoned in gold with verses from the Koran, Islam's holy book.

Lekovic, an activist with California's Muslim Public Affairs Council, then joined the women in kneeling in prayer in the direction of Mecca, the holiest city in Islam.

Friday's gathering at the interfaith center - a former Jewish synagogue near downtown Los Angeles with Stars of David etched into the stained glass windows - aims to encourage women to participate fully in Muslim prayer and education.

Significantly, women are at the helm.

In traditional mosques, women pray separately from men, which can distance them from the lecturer. Women may also feel excluded for other reasons, such as male-only Koran studies.

Muslim women often meet for casual gatherings and prayer, but rarely do they unite in a formal setting, such as the Friday worship, under the banner of a mosque.

"The fact that this is the Friday prayer, the jumma'a, and that there's a woman officially giving the sermon, the khutbah, that's new," said Donna Auston, a doctoral candidate studying American Muslim culture atRutgers University.

MEN AND WOMEN SHOULD FEEL AT HOME

Hussam Ayloush, of the Council on American-Islamic Relations, said some Muslims may prefer integration - not segregation - as a way to draw women into Islam.

"A mosque is a place of worship where all segments of the Muslim community, men and women ... should feel at home," he said.

After the initial call to prayer and Lekovic's sermon, the women sat in a circle under the tall arched ceiling, some with tears in their eyes, and reflected on the experience.

"I want every woman to experience what it feels like to learn from a female religious authority in the mosque," said M. Hasna Maznavi, 29, who founded the Women's Mosque of America organization withSana Muttalib, 31, after feeling excluded from traditional mosques. They say it is the nation's first female-only mosque.

Lubna Muttalib, Sana's mother, said she has sat so far behind men at other mosques she has had to watch the sermon projected onto a screen.

"It's so good to see my khatiba in person, instead of looking at a TV screen," she said, referring to the person who gives sermons.