New York driver says stabbed since he is Muslim / PHOTO

A Muslim taxi driver wounded in a stabbing said he believed he was attacked because he is Muslim. 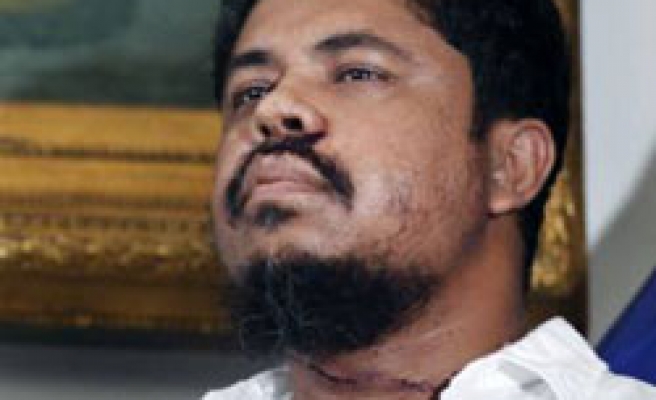 A Muslim taxi driver wounded in a stabbing said on Thursday he believed he was attacked because he is Muslim.

Ahmed Sharif, a 43-year-old Bangladeshi immigrant, said a passenger in his cab on Tuesday asked if he was Muslim and celebrated Ramadan and then slashed his neck, face and shoulders.

Sharif, who was treated at a hospital for his wounds, met with Mayor Michael Bloomberg on Thursday and described the attack at a news conference at City Hall.

"Of course it was for my religion," he said of the incident. But asked if he thought it was related to the mosque debate, he said: "No, we didn't talk about the mosque."

Sharif said sometimes he feels very unsafe driving a taxi, which he has done in New York for 15 years.

After he, his wife and their four children met with the mayor, he said: "Now I feel a little better than before."

"Our mayor is continuing to help and to make sure I'm safe, that my family is safe," he said.

New York is home to some 800,000 Muslims, about 10 percent of the population, and there are about 100 mosques throughout its five boroughs.

About half the city's cab drivers are Muslim, according to the head of the New York Taxi Workers Alliance, who said the emotionally charged controversy helped fuel the violence.

"The rhetoric has risen to such a point that violence was inevitable," said Bhairavi Desai, executive director of the alliance. "Fearmongering leads to hate crimes. Fear-mongering is at the heart of what happened to Ahmed Sharif."

Imam Shamsi Ali of the Islamic Cultural Center of New York, which was the city's first building erected specifically to house a mosque, said: "When the incident happened two days ago it created worries and fear among the Muslim community."

"It really created a lot of tension, fear, worry that this will happen to them ... especially the women who symbolize Islam through their dress. It's very, very scary, but we are working very closely with law enforcement," he said.

Suspect Michael Enright, 21, was charged with attempted murder as a hate crime, assault and criminal possession of a weapon, police said. They also said he was drunk when he was arrested near the scene of the attack in midtown Manhattan.

On Wednesday, more than 40 religious and civic groups announced a coalition in support of the mosque project. The coalition included some families of Sept. 11 victims.