A 28-year-old man with a troubled history ambushed two officers while they were sitting in their patrol car in Brooklyn, apparently to avenge the killings by white officers of unarmed black men 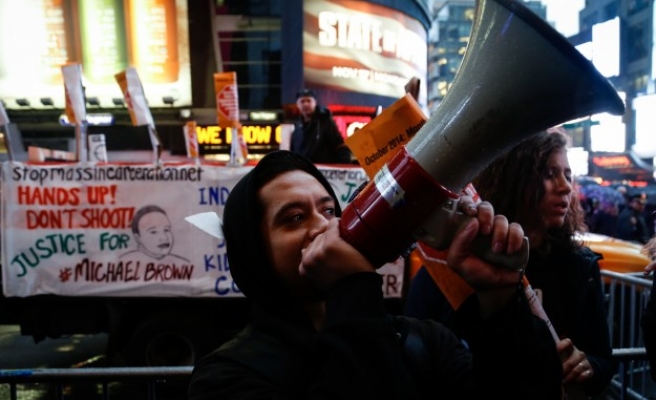 New York City Mayor Bill de Blasio sought to ease tensions with the police force on Monday, calling for a suspension of protests against the use of excessive force until after the funerals of two officers killed by a gunman over the weekend.

De Blasio, a Democrat who has come under intense criticism from some police unions for his handling of protests over police killings of unarmed black men, asked the city to stand by families of the officers slain on Saturday.

"It's a time for everyone to put aside political debates, put aside protests, put aside all of the things we will talk about in due time," de Blasio said in a speech to a charity with close ties to the New York Police Department. "Let's comfort these families, let's see them through these funerals. Then debate can begin again."

The U.S. Justice Department condemned the attack in which a 28-year-old man with a troubled history ambushed two officers while they were sitting in their patrol car in Brooklyn, apparently to avenge the killings by white officers of unarmed black men in Ferguson, Missouri, and New York City. The gunman then killed himself.

Earlier Monday, Police Commissioner William Bratton urged an easing of tensions after some in his force accused de Blasio of being insufficiently supportive of police.

"This issue is really starting to go down partisan lines, Republican/Democrat," Bratton told NBC's "Today" program. This is something that should be bringing us all together, not taking us apart."

De Blasio had sympathized with protesters who took to the streets after grand juries declined in the last few weeks to charge white officers in the killings. De Blasio was elected last year on a promise to advance civil rights after two decades of his predecessors emphasizing law and order policies that helped New York shed its reputation for violent crime.

Several police officers turned their backs on de Blasio in protest when he arrived at the Brooklyn hospital where the two officers were taken after they were shot. The police union said the mayor had blood on his hands.

Bratton said he considered it inappropriate for police officers to turn their backs on the mayor. He said labor talks and pension concerns were fueling their discontent.

De Blasio and Bratton earlier on Monday visited the families of both officers.

The grand juries that investigated the killings of Michael Brown in Ferguson and Eric Garner in New York found that the police officers involved broke no laws. On Monday, a Milwaukee prosecutor said that a police officer would not be charged for the April fatal shooting of a black man.

The officer in the Milwaukee shooting, who like the officers in Ferguson and New York incident was white, was fired in October for failing to follow police procedure.

"There's just no reason that we should have to be dealing with this," Cole told reporters. "One of the main focuses that we've had in the Department of Justice is officer safety and making sure that we have procedures in place and training in place to encourage that."

Investigators are checking into whether the gunman, identified as Ismaaiyl Brinsley, attended any of the protests against exceesive police force and said the suspect had made "anti-police" comments online.

A foundation established by late New York Yankees owner George Steinbrenner will pay for the education expenses of the two children of slain officer Rafael Ramos, a spokeswoman said on Monday. Ramos, 40, and his partner, Wenjian Liu, 28, were shot dead in the Bedford-Stuyvesant neighborhood of Brooklyn. Liu had recently married and did not have any children.