New York City police turned out in their thousandsfor the funeral of the second of two officers murdered last month, but in a sign of persistent tensions with Mayor Bill de Blasio, hundreds turned their backs when he delivered his eulogy 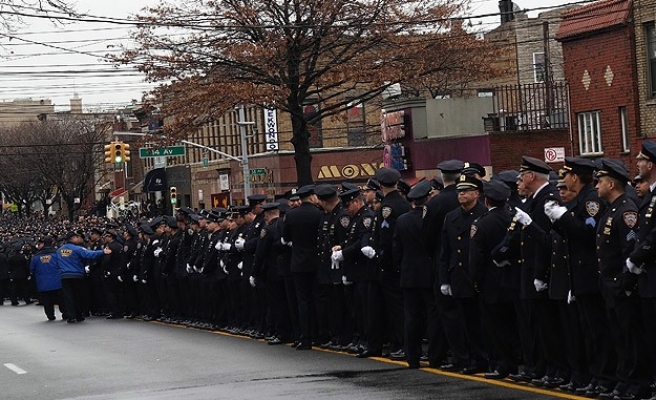 Hundreds of law enforcement officers turned their backs to a video monitor showing New York City Mayor Bill de Blasio as he spoke Sunday at the funeral of the second of two officers shot and killed last month.

The funeral was broadcast to thousands of uniformed police officers, from around the United States, who stood outside of Aievoli Funeral Home in Bensonhurst, Brooklyn, to mourn New York Police Department officer Wenjian Liu, who was gunned down, along with his partner, on Dec. 20.

When Mayor de Blasio's image appeared on the giant screen while he was delivering an eulogy, hundreds of officers turned their backs to protest what some say is his anti-police rhetoric following a grand jury decision not to file charges against a white police officer over the death of unarmed black man Eric Garner.

"All of our city is heartbroken today ... Detective Wenjian Liu was a good man," de Blasio said during the ceremony. "He walked a path of courage, a path of sacrifice, a path of kindness. This is who he was."

The officers' protest came in defiance of New York police commissioner Bill Bratton's call to refrain from any "act of disrespect."

"A hero’s funeral is about grieving, not grievance," Bratton said Friday in a message to officers who planned to attend the funeral.

The rift between de Blasio and the police department stems from his support for New Yorkers who have been protesting the lack of an indictment against the police officer who killed Garner. Some have accused him of feeding anti-police sentiments in society.

There was a similar protest against the mayor at last week's funeral for the officer killed alongside Liu, with lines of police turning their backs when he appeared on a giant screen.

Officers Rafael Ramos, 40, and Wenjian Liu, 32, were shot at point-blank range by a black gunman while they were sitting in their marked police car in Brooklyn.

The suspect, identified as Ismaaiyl Brinsley, killed himself at a subway station minutes after the shooting, and had posted angry anti-police messages on social media.

The shooting came after weeks of anti-police brutality protests over fatal encounters between white police officers and unarmed black men in 2014.