No indictment for white officer in deadly Ferguson shooting

A grand jury refused to bring charges against a white police officer for fatally shooting an unarmed black teen in the city of Ferguson, in a decision that has triggered violent protests in the St. Louis suburb. 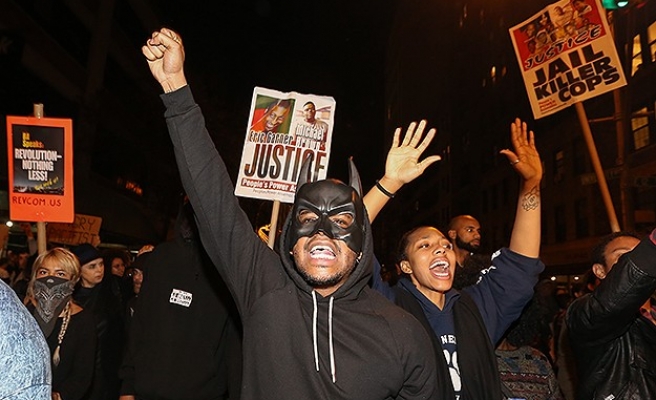 Violence flared again in the St. Louis suburb of Ferguson on Monday, with gunshots heard and tear gas fired, after a Missouri grand jury decided not to indict a white police officer over the fatal shooting of an unarmed black teenager in August.

Angry crowds took to the streets around the Ferguson police department after the grand jury determined there was no probable cause to charge officer Darren Wilson with any crime for the shooting of 18-year-old Michael Brown.

St Louis police reported heavy automatic gunfire late on Monday in the area near where Brown was shot and killed on Aug. 9. The Federal Aviation Administration issued temporary flight restrictions for the city.

Protests were also staged in New York, Chicago, Washington, D.C., Seattle and Oakland over a case that has highlighted long-standing racial tensions not just in predominantly black Ferguson but across the United States.

"They determined that no probable cause exists to file any charge against officer Wilson," St. Louis County Prosecutor Bob McCulloch told reporters in Clayton, Missouri, the St. Louis suburb where the grand jury met.

Storefront windows were smashed near the Ferguson Police Department, and at least one police cruiser and another vehicle on the street were set on fire. Gunshots were heard and police responded with volleys of tear gas and flash-bang canisters.

Brown's family said through their attorneys they were "profoundly disappointed" by the grand jury's finding.

"While we understand that many others share our pain, we ask that you channel your frustration in ways that will make a positive change," the family said in a statement.

Attorneys for Wilson, who has avoided the spotlight since the shooting, did not immediately respond to a request for comment.

President Barack Obama called for protesters to remain peaceful and for police to show restraint.

"We are a nation built on the rule of law and so we need to accept that this decision was the grand jury's to make," Obama said in a televised news conference. "We need to recognize that the situation in Ferguson speaks to broader challenges that we still face as a nation. The fact remains that in too many parts of this country a deep distrust exists between police and communities of color."

Ahead of the news, a crowd of several hundred people gathered outside the Ferguson Police Department, and many began to scream angrily as word of the grand jury's decision spread.

"Murderers, you're nothing but murderers," one woman shouted through a megaphone at officers clad in riot gear. "Stinking murderers."

A group of protesters briefly mobbed a police car, throwing rocks and knocking out its windows, prompting a group of officers clad in riot gear to advance. Sounds of gunshots briefly caused police to take cover behind their vehicles. A Walgreens drugstore was set alight.

"They need to understand that when you put your son in the ground, that's a pain that you can never overcome," said Paulette Wilkes, a 40-year-old teacher's assistant. "People are trying to process it. I think once they process it they will continue to burn and loot because they're angry."

Missouri Governor Jay Nixon called up the National Guard ahead of the announcement to protect against the kind of rioting that flared in the weeks after Brown was shot and killed.

Some activists described the decision to preemptively activate the guard as unnecessarily heavy-handed, particularly following complaints that police inflamed crowds in August by responding in a heavily militarized posture with tear gas and rubber bullets.

The grand jury, with nine white and three black members, began meeting in late August and heard evidence that included witnesses called by the prosecution as well as a private pathologist hired by the Brown family to review the shooting. Nine jurors needed to agree to bring charges.

McCulloch declined to say if the jury's decision was unanimous, noting that grand jury proceedings are completely secret and that only the jury members themselves know the details of the proceedings.

A federal probe into the shooting is continuing, and U.S. Attorney General Eric Holder emphasized in a statement that the Justice Department investigators had not yet reached any conclusions.

"Though we have shared information with local prosecutors during the course of our investigation, the federal inquiry has been independent of the local one from the start, and remains so now. Even at this mature stage of the investigation, we have avoided prejudging any of the evidence," he said.

McCulloch described a tangled mass of conflicting testimony from 60 witnesses about what happened during the incident that led to Brown's death, but said much of it did not square with the physical evidence.

"Many of the same witnesses acknowledged that they did not see the shooting," McCulloch said. "The grand jury worked tirelessly to examine and reexamine the testimony of all the witnesses and all the physical evidence."

Lawyers for Brown's family say the teen was trying to surrender when he was shot, while Wilson's supporters say the officer feared for his life and opened fire in self-defense.

Witnesses disagreed on whether Brown's hands were up at the time he was shot, McCulloch said, adding that Wilson shot at Brown 12 times. The final shot hit Brown in the top of his head.

Brown is suspected of having stolen cigars from a nearby convenience store shortly before the incident. He and a friend had been walking down the middle of the street when Wilson approached them. Police said in August that Wilson was not aware of the robbery at the time.

In Chicago, demonstrators walked up Lake Shore Drive carrying banners that read "Justice for Mike Brown," while protesters in Seattle lay on the street in a "die-in" protest.

In New York, civil rights activist Al Sharpton called the decision "an absolute blow to those of us who wanted to see a fair and open trial." In Boston, dozens of protesters chanted to demand "justice for Mike Brown" in front of the state house.

A crowd of about three dozen protesters gathered outside the courthouse in Clayton where the grand jury had met, and many stood in stunned silence following the news.

"That's just how the justice system works. The rich are up there and the poor are down here," said Antonio Burns, 25, who lives in Clayton. "They think they can get away with it."