Shouts of ‘Shame on Canada’ as Harper government continues to refuse to hold national inquiry into murders of Indian women. 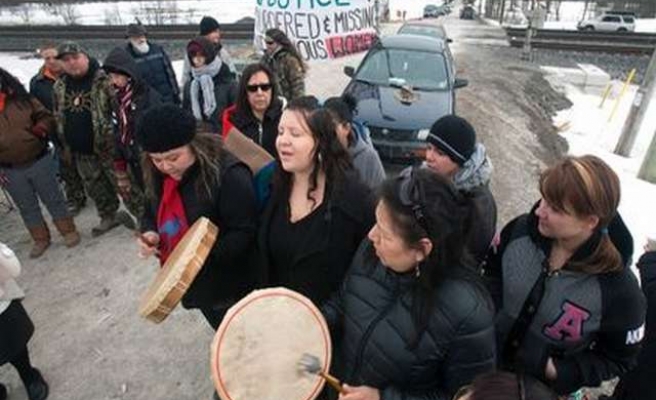 A historic national roundtable convened in Canada’s capital Friday to discuss 1,200 murdered or missing aboriginal women has ended in frustration for families of the victims.

“I was really pissed off and was really upset that (Aboriginal Affairs Minister Bernard) Valcourt said it’s our (aboriginal) men that are killing our women,” said Bernadette Smith, whose sister disappeared from a Winnipeg street five years ago.

The daylong conference brought together federal and provincial politicians, victims of the families and aboriginal leaders.

Between 1980 and 2012, 1,181 aboriginal women were killed or disappeared, according to a Royal Canadian Mounted Police report made public last year.

There’s been a growing cry from opposition political parties and aboriginals for the Conservative government of Prime Minister Stephen Harper to hold a national inquiry into the murders, but so far he has refused.

At a press conference following Friday’s meeting, Assembly of First Nations National Chief Perry Bellegarde expressed hope that something can be done to curtail the violence and said everyone agreed public awareness must be raised, but admitted the session ended without agreement on an inquiry.

“We are still moving toward the call for a federal inquiry … a public inquiry,” he said.

During the meeting Valcourt reiterated the government’s stance that the women have for the most part been victims of domestic violence and that changing the behaviors of men in aboriginal communities will go a long way to stop the crimes.

But critics pointed out that the violence is not just confined to aboriginal enclaves.

The meeting marks the first time federal and provincial politicians, aboriginal leaders and the families of victims have met to tackle the problem, which has been ongoing for decades. They agreed to meet again before the end of 2016.

Police have been accused of lackluster investigations into the murders and disappearances because the victims are aboriginal and the stereotypes of aboriginals being drunks and prostitutes persists in some minds.

“I’ve seen the systemic racism,” Marion Horne, vice-president of the Native Women’s Association of Canada, said after the conference. She said the lack of a national inquiry into 1,200 missing and murdered women is unconscionable.

“There’s something wrong in our society … we do nothing about it,” Horne said during a live interview. “Why are our women going missing and murdered?”

At a parallel meeting taking place nearby, other victims’ families and native leaders gathered and some shouted “Shame on Canada.”

C.J. Julian, whose sister was one of serial killer Robert Pickton’s approximately 50 aboriginal victims a decade ago, said the treatment of aboriginals as second-class citizens has to change.

“This is a life and death matter, and it has to stop,” she told the Canadian Broadcasting Corporation as she pleaded for aboriginal women to be treated as equals. “I am not a drunk. I’m not a squaw … I belong to the Beaver Clan. My Indian name is Shining Eagle Woman. That’s who I am.”

The pressure to do something led the government to introduce a five-year action plan last September, but the focus is on ending family violence.

Bellegarde said the $25 million pledged to the program was not enough.

The Royal Canadian Mounted Police said aboriginal women account for 16 percent of all female homicides and 11.3 percent of missing women, yet they make up only about 4.3 percent of the population.

New Democratic leader Thomas Mulcair accused the government of refusing the call for a national inquiry because the women are Indian.

“Racism is involved,” he said.

“Absolutely, it’s racist,” she said. As for Harper’s refusal of a national inquiry, she said the prime minister “is evading the problem.”