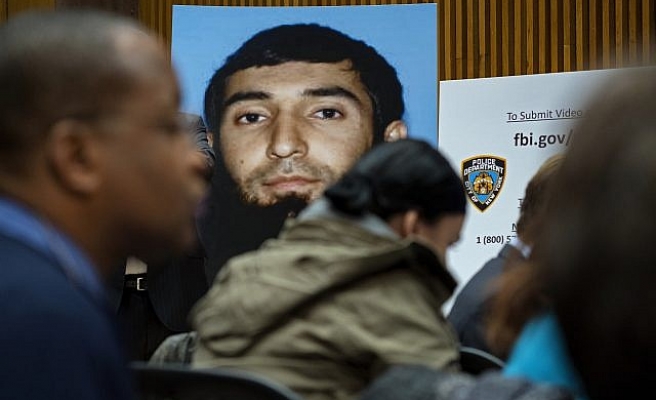 The suspect accused of killing eight people and injuring a dozen others in New York City is facing two federal charges related to the attack, and could face the death penalty, prosecutors announced Wednesday.

Uzbek immigrant Sayfullo Saipov has been charged with providing material support to a designated foreign terrorist organization, namely ISIL, and violence and destruction of motor vehicles, according to court documents.

The first charge carries a maximum life sentence, while the second is eligible for the death penalty, Acting U.S. Attorney for the Southern District of New York Joon H. Kim told reporters.

In all, two Americans and six foreign nationals were killed when Saipov allegedly drove a rental truck down a bike path in lower Manhattan before striking a school bus carrying special needs children.

A criminal complaint alleges that a document found near the truck's driver side door stated “in substance and in part” in Arabic the Islamic creed, "No God but God and Muhammad is his prophet", as well as the phrase, "Islamic Supplication. It will endure", an expression associated with ISIL.

Authorities said late Wednesday a second person that was sought for questioning had been found, but officials did not provide any details.

While being interviewed by law enforcement officers at a local hospital where he was recovering from a gunshot wounds, Saipov allegedly admitted to planning an attack about a year ago, and decided to use the truck two months ago.

He told police he rented a truck Oct. 22 to practice making turns ahead of the attack, and decided to carry it out on Halloween "because he believed there would be more civilians on the street for the holiday", according to the criminal complaint.

He also requested to display ISIL's flag in his hospital room, the document said.

Earlier Wednesday, President Donald Trump said he was open to the idea of sending Saipov to the controversial military prison at Guantanamo Bay, Cuba, and the White House appeared to give weight to the idea by saying it considers Saipov an "enemy combatant". But with the filing of federal charges against Saipov that seems unlikely.

Sending Saipov to Guantanamo would be a "grave mistake", according to Amnesty International USA.

"He’s a criminal suspect and should be treated as such by the U.S. justice system," said the group’s Security with Human Rights Director, Daphne Eviatar. "Guantánamo has become an international symbol of torture, rendition and indefinite detention without charge or trial – it must be closed, not expanded.

Lashing out at the U.S.’s immigration system and in an attempt to blame the attack on the top senator from New York, President Donald Trump wrote on Twitter that the country should change to a system he has long sought.

“The terrorist came into our country through what is called the ‘Diversity Visa Lottery Program,’ a Chuck Schumer beauty,” he said, referring to the Senate’s senior Democrat. “We are fighting hard for Merit Based immigration, no more Democrat Lottery Systems. We must get MUCH tougher (and smarter).”

New York Governor Andrew Cuomo slammed the remarks, telling reporters at a news conference Wednesday he is bothered by any attempt “by anyone to politicize this situation.

"To politicize this event is wholly counterproductive," he said. "His tweet wasn't even accurate as far as I'm concerned. That was a bipartisan law that was passed."

The Department of Homeland Security confirmed to Anadolu Agency the suspect entered the U.S. via the Diversity Immigrant Visa Program that issues as many as 50,000 visas in an annual lottery.

The program was signed into law by Republican President George H.W. Bush in 1990.

New York Police Department deputy commissioner John Miller earlier cautioned against possible targeting of Muslims following the attack, saying anyone who does "will be prosecuted to the fullest extent of the law.

“This is an important time to say this isn’t about Islam. It’s not about what mosque he attends. There are hundreds of thousands of Muslims in New York City who are adversely affected by this,” Miller said.