Seneca Village was a small village in the borough of Manhattan in New York City, founded by African Americans and was razed to make Central Park. 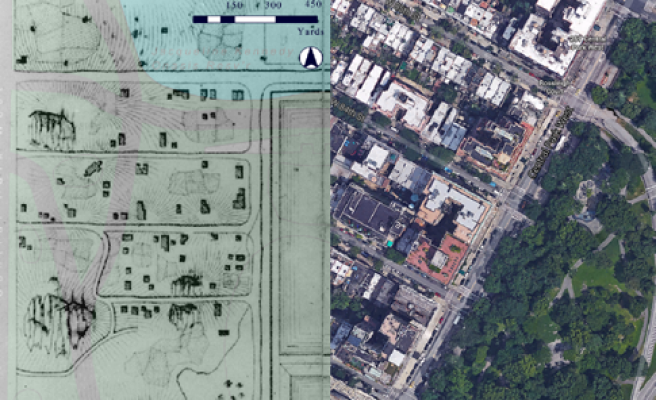 A decision in 1854 to create a park in New York City was made under a law that allowed the government to seize private land for public purposes.

Seneca Village was once a small borough that was Manhattan's first significant community of African-American property owners - two thirds were African American with the remaining third was made up of the Irish community and existed between the years of 1825 through to 1857.  It bustled with businesses, houses, gardens and a school, and was also home to European immigrants. Located on 5 acres of land between where 82nd and 89th Streets and Seventh and Eighth Avenues would be now, it had three churches, a school and several cemeteries. At least 50% were homeowners.

Creation of Park was British Envy

A growing population and an increasing immigrant community defined the area. However as time passed, the need for a public space where pro-Park lobbyists envious of Britains's acres of parks desired their own place that largely “affluent merchants, bankers and landowners”, who wanted a “fashionable and safe public place where they and their families could mingle and promenade”.

As the campaign to create Central Park moved forward park lobbyists and the media began  a smear campaign describing Seneca  Village and neigbouring communities in the area as "shantytowns" and the residents there as "squatters". The village was razed for park construction. Residents were offered $2,335 for their property. Members of the community fought to retain their land however after two years conceded defeat.

Following the emancipation of African Americans for many the safest way to build their community was to live a safe, enclaved community.The destruction of the village also paved the way for the destruction of the community's safe haven. Whilst many stayed in the New York area many did not stay together. An attempt by the Seneca Village Project to trace the genealogies of those who lived there, and find any living descendents proved unsuccessful.

In the summer of 1856, Mayor Fernando Wood prevailed, and residents of Seneca Village were given final notice and following its destruction, it was erased from memory for nearly a hundred years until in 1998 when the Senece Village Project was formed. The aim of the project is to raise awareness of the Village's signficance as a  free, middle-class black community in 19th century New York City. Amongst many programs, the project also provides educational programs as well as arecheological and archival research components to bring the history of the Village to public knowledge.