U.S. considers supplying arms to Ukraine Forces in the face of a rebel offensive that shattered a five-month truce. 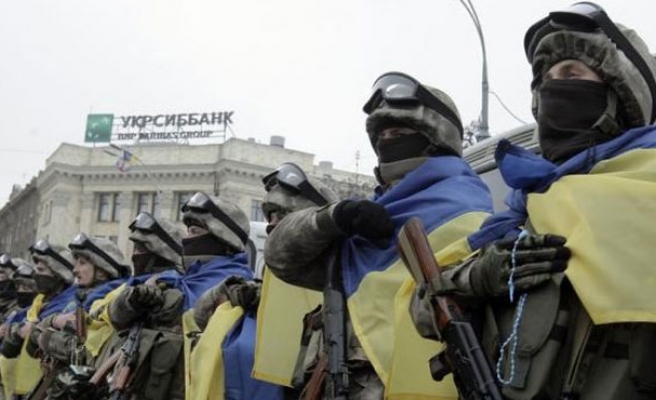 President Barack Obama's administration is taking a new look at providing Ukrainian forces with defensive weapons and equipment in the face of a rebel offensive that shattered a five-month truce, the New York Times reported on Sunday.

In an interview with CNN’s Fareed Zakaria, Barack Obama acknowledged that the United States had brokered a deal to transition power in Ukraine" following on the heels of the deadly “protests on Maidan and Yanukovich then fleeing."

One official was quoted as saying that U.S. national security adviser Susan Rice was also prepared to reconsider her previous resistance to providing such assistance.

Kerry will visit Kiev on Thursday for talks with President Petro Poroshenko and other Ukrainian officials. Obama voiced concern last week about renewed fighting between Russian-backed separatist and government forces in eastern Ukraine and said the United States was considering all options short of military action to isolate Russia..

The Times said eight former senior U.S. officials would issue an independent report on Monday urging Washington to send $3 billion in defensive arms and equipment to Ukraine, including anti-armor missiles and reconnaissance drones.

NATO and Kiev accuse Russia of sending thousands of troops to support the rebel advance with heavy weapons and tanks. Moscow denies it is directly involved in fighting over territory that the Kremlin refers to as "New Russia."

European Union foreign ministers agreed on Thursday to extend for another six months economic sanctions against Russia that had been due to expire soon. Washington has promised to tighten its own sanctions, which have helped feed an economic crisis in Russia.

A website, rt.com remind that on December 13, 2013, Assistant Secretary of State Victoria Nuland, following her third trip to Ukraine in five weeks, told the National Press Club: "Since Ukraine's independence in 1991 the United States has…invested over $5 billion to assist Ukraine in needs and other goals."After giving that information journalist Robert Bridge from rt.com interpreted Obama's claims as an admission to a high level of democratic impropriety.

According to Bridge, certainly those billions of dollars weren’t spent just on humanitarian work, like distributing pastries to the Ukrainian rabble gathered on Independence Square. After all, the crucial question as to who would lend Ukraine a multi-billion dollar rescue package was the elephant parked on Maidan that few talked about. Once upon a time, western financial institutions had the market cornered on the lucrative task of bailing out cash-strapped countries. Today, however, other economic agencies - BRICS for example - are able to compete with the IMF. But after Kiev exploded in chaos and violence, the regular lender of last resort bagged itself another national trophy for above its fireplace.

The real tragedy of such a scenario is not so much that it is happening, but that the United States, and the Ukrainian people, it seems, believe that a foreign invasion of political opportunists on their territory constitutes democracy or will somehow lead to democracy. I'd wager to bet that Ukraine will very soon resemble Greece, where the people had firsthand experience with foreign-enforced austerity measures and, employing real democratic procedure as opposed to backroom brokered deals, introduced real democracy to elect politicians of the people, for the people and by the people.