The new funding is intended to help Israel boost production of a short-range rocket defense system, known as Iron Dome. 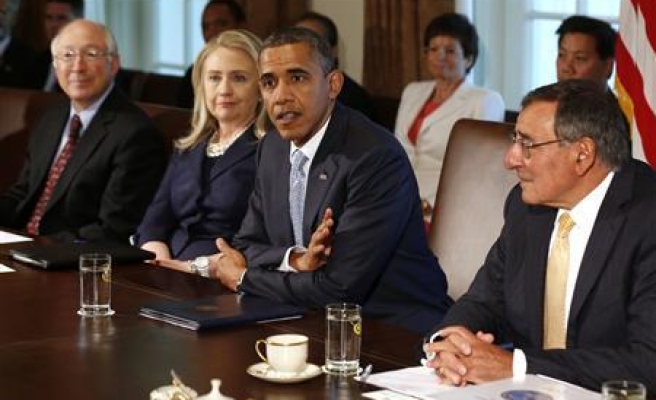 President Barack Obama signed a measure on Friday to strengthen U.S.-Israeli military ties, a move that could score points with American Jewish voters on the eve of Republican rival Mitt Romney's highly publicized visit to Israel.

His reaffirmation of an "unshakeable commitment" to Israel's security appeared timed to upstage Romney, who has accused the president of undermining Washington's relationship with its No. 1 partner in the Middle East.

The White House denied it was an election-year maneuver, even though senior administration officials have lavished attention on Israel in recent weeks.

Romney, whose Olympics-week tour of London has been plagued by diplomatic stumbles, will travel on Saturday to Jerusalem and meet on Sunday with Israeli Prime Minister Benjamin Netanyahu, who has had a strained relationship with Obama.

"I have made it a top priority for my administration to deepen cooperation with Israel across a whole spectrum of security issues," Obama said in the Oval Office.

Congress passed the legislation last week with broad support from Republicans and Obama's Democrats, but the president waited until Friday to put his signature to it.

He was flanked by U.S. Senator Barbara Boxer and Representative Howard Berman, the bill's sponsors, and several prominent Jewish leaders, including Lee Rosenberg, chairman of AIPAC, the leading pro-Israel lobby, and Richard Stone, chairman of the Conference of Presidents of Major American Jewish Organizations.

Obama, criticized by some of Israel's U.S. supporters for being too tough on a crucial ally, wants to shore up his advantage over Romney among Jewish voters, who could prove critical in battleground states like Florida and Pennsylvania in the Nov. 6 election.

Obama received 78 percent of the Jewish vote in the 2008 election, but a nationwide Gallup poll in June showed him down to 64 percent backing versus Romney's 29 percent.

Obama angered many Israelis and their U.S. supporters last year when he insisted any negotiations on the borders of a future Palestinian state begin on the basis of lines that existed before Israel captured the West Bank and Gaza Strip in a 1967 war. His Middle East peace efforts have stalled.

Obama visited Israel as a candidate in the 2008 campaign but has not done so as president. He has insisted security ties with Israel have never been stronger, although he has pressed Netanyahu to hold off on any attack on Iran's nuclear sites to give diplomacy and sanctions more time to work.

Romney has accused Obama of being too hard on Israel and not tough enough with Iran.

The new bill calls for enhanced cooperation with Israel, already a major beneficiary of military aid, on missile defense and intelligence, and increased access to advanced weapons.

"Unfortunately this bill does nothing to address ... evasiveness from the White House on whether President Obama recognizes Jerusalem as the capital of Israel, which raised doubt about the president's commitment to our closest ally in the region," she said.

The White House says Obama holds to long-standing U.S. policy that the status of Jerusalem, which Israel considers its undivided capital despite a lack of international recognition of its annexation of the Arab half of the city, be resolved in "final-status" negotiations between Israel and the Palestinians.

White House spokesman Jay Carney denied the bill signing was timed to pre-empt Romney, saying it was a scheduling matter, but adding, "I understand the coincidence."

Assistant Secretary of State Andrew Shapiro said Washington understood Israel's anxiety about the changing situation in the Middle East and remained committed to helping it maintain its "qualitative military edge in the region."

Defense Secretary Leon Panetta will visit Israel next week to discuss heightened tensions in the region, including the escalating conflict in Syria.