"No one in the United States of America should ever be targeted because of who they are, what they look like, or how they worship," Obama said in a statement 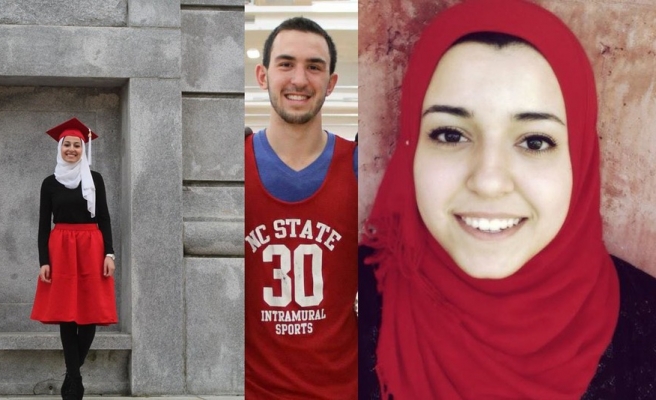 U.S. President Barack Obama on Friday described the deaths of three young Muslims gunned down in North Carolina this week as "brutal and outrageous murders" and said no one in theUnited States should be targeted for their religion.

The president's statement came as the U.S. Justice Department said it would join the FBI's preliminary inquiry to determine whether the man accused in the Chapel Hill shooting on Tuesday broke any federal laws, including hate crime laws.

"No one in the United States of America should ever be targeted because of who they are, what they look like, or how they worship," Obama said in a statement, offering his condolences to the victims' families.

The families had called on Obama to insist that federal authorities investigate whether the murder suspect, 46-year-old paralegal student Craig Stephen Hicks, was motivated by hatred toward the victims because they were Muslim.

Police seized more than a dozen firearms and a large amount of ammunition from his home, according to search warrants filed on Friday, WRAL-TV reported.

According to the warrants, a friend of the victims' stopped police and directed them to the condo, where authorities found Barakat dead and bleeding from his head in the front doorway, the television station reported.

One of the sisters was found in the kitchen and the other in its doorway, according WRAL-TV.

On Thursday, Turkish President Tayyip Erdogan criticized Obama and other U.S. leaders for their silence about the incident, which has garnered international attention and left some U.S. Muslims feeling concerned about their safety.

United Nations Secretary-General Ban Ki-moon on Friday praised the three victims, who were all involved in humanitarian aid work, as representing the best values of global citizenship and said he was deeply moved by scenes of thousands of people mourning their deaths.

A Justice Department spokeswoman said its Civil Rights Division and the U.S. Attorney's Office for the Middle District of North Carolina would participate in the FBI inquiry announced in the case Thursday evening.

Muslim advocates on Friday called the inquiries a key first step towards the full federal investigation they are seeking.

In a separate investigation, local police have cited a parking dispute as Hicks' motive but said they were also looking into whether religious hatred played a role.

Neighbors said Hicks, who posted anti-religion messages and a photo of a gun he said belonged to him on his Facebook page, was known in the condo community as someone prone to grow angry over parking troubles and noise.

Mohammad Abu-Salha, the father of the two female victims, told CNN that his daughter Yusor had said Hicks made her feel uncomfortable after she moved into a neighboring condo where her new husband lived.

"Daddy, I think he hates us for who we are," Abu-Salha said his daughter told him, according to CNN.