Obama in Cuba for historic visit 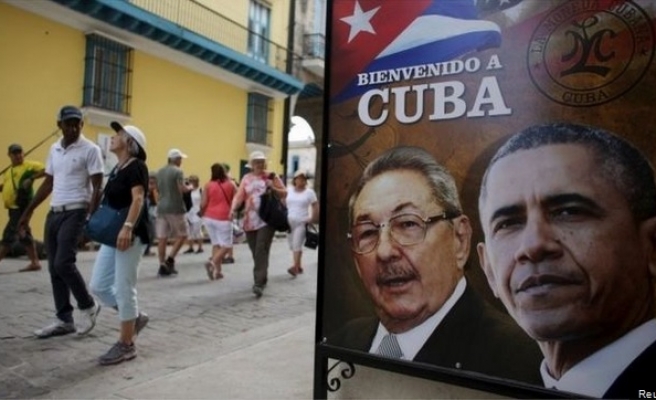 American President Barack Obama arrived in the Cuban capital Havana Sunday, kicking off a historic visit which made him the first head of state from the U.S. to visit the island in 88 years.

Having taken off from the Andrews Air Force Base in Washington D.C., the Air Force One with Obama and his family touched down in Havana after an almost three-hour flight.

Obama will spend three days, including Sunday in Havana, making first a tour of the Old Havana and a trip to the Cathedral, where he is expected to meet the Cardinal Jamie Ortega, according to the pool reports of the White House.

During his trip in Havana, Obama will also visit the U.S. embassy in Cuba and talk to the staff and families there.

The U.S. and Cuba began a normalization process last year and restored the diplomatic relations by reopening embassies after approximately 50 years.

The U.S. president will also meet Cuban President Raul Castro at the Palace of the Revolution and attend a dinner there. He will also attend an event on entrepreneurship.

On Tuesday, Obama will address the Cuban people and meet with representatives from nongovernmental organizations.

The same day, Obama will leave Cuba and depart for Argentina.

The American president had announced his historic trip to Cuba last month.

Havana and Washington began to mend ties long-battered by the Cold War in 2014, opening embassies in their respective capitals the following summer.

As part of this normalization process, some of the U.S. sanctions against Cuba had also been removed, including restrictions in mail services, civil aviation, loosening of travel restrictions, banking, trade and navigation. Moreover, Cuba was removed from the U.S. list of countries which support terrorism.

During his speech last week, Obama had said his trip to the island would contribute to the diplomatic relations of both countries.

Obama's trip is the first for a sitting U.S. president since former president Calvin Coolidge visited nearly 90 years ago accompanied by a U.S. warship.

Another first for Cuba will be when the rock band, the Rolling Stones, will play a free concert in Havana on March 25.