Obama becomes first serving U.S. president to visit Malaysia in 48 years upon arriving for three-day visit. Like the U.S., Malaysia can benefit from its ethnic and religious diversity, Obama said 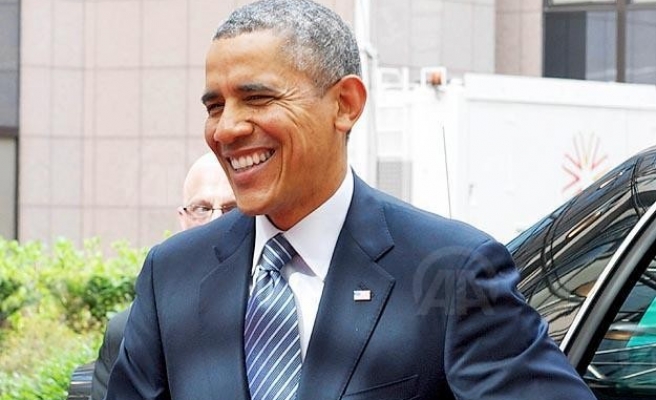 U.S. President Barack Obama expressed Saturday his belief that both the U.S. and Malaysia could provide the next generation with a better future by benefiting from their ethnic and religious diversity.

"I believe that whether we come from a remote village or a big city, whether we live in the United States or in Malaysia, we all share basic human aspirations -- to live in dignity and peace," he said at a state banquet hosted by Malaysia’s King Tuanku Abdul Halim Mu'adzam Shah at the Royal Palace, according to Malaysian media.

"[We want] to shape our own destiny, to be able to make a living and to work hard and support a family," the U.S. president said upon arriving for his three-day visit to Malaysia, the third nation in his Asia tour. "And most of all, to leave the next generation something better than what was left to us."

Obama also took the royal banquet audience by surprise by speaking a few Malay words, even starting his speech with "Selamat petang" (Good evening) and ending it with "terima kasih banyak" (thank you very much).

Not stopping there, the president -- who spent some years in nearby Indonesia as a child -- earned great applause from the attendees by using "bekerjasama" (working together) and "boleh spirit" in his speech.

Referring to the last U.S. visit on a presidential level to Malaysia by former president Lyndon B. Johnson in 1966, Obama noted that Johnson had written in his memoirs "of how impressed he was by the extraordinary vitality and eagerness he saw in the faces of people here and throughout Southeast Asia."

"And I am eager to see that same 'boleh' spirit tomorrow when I have the opportunity to speak with young people from across Southeast Asia at Universiti Malaya," Obama added, expressing his gratitude for the generosity and hospitality of the Malaysian people.

The state banquet at the Royal Palace was closed to the press, with the exception of Malaysia’s official state media.

On Sunday at Universiti Malaya, Obama is expected to deliver a speech and take questions from ten young leaders from Southeast Asian nations.

He will also visit the U.S. embassy in Jalal Tun Razak and the National Mosque, and hold talks with Malaysian Prime Minister Najib Razak, with whom he will launch the Malaysian Global Innovation and Creative Centre (MaGIC) -- an agency to boost Malaysia's entrepreneurial sector.

On Monday morning, the president will witness the signing of several corporate agreements between U.S. and Malaysian companies.

Obama’s trip to the Southeast Asian nation of 30 million people had to be postponed last October due to a budget standoff that led to a partial U.S. government shutdown.

Prior to his arrival in Malaysia, Obama had visited Japan and South Korea, where he paid his condolences to the victims of the April 16 ferry disaster that has left over 300 passengers dead or missing.

Obama will leave for the Philippines -- the final leg of his Asia tour -- later on Monday.