Obama orders review of U.S. police use of military hardware

Obama ordered a review of programs that enable law enforcement to acquire military equipment from the Pentagon. 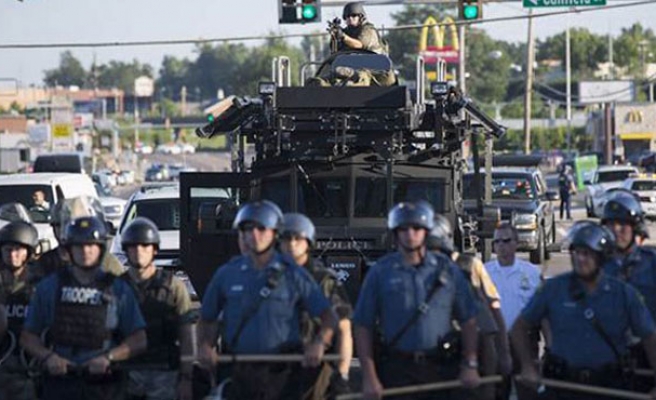 U.S. President Barack Obama has ordered a review of the distribution of military hardware to state and local police out of concern at how such equipment has been used during racial unrest in Ferguson, Missouri.

A senior Obama administration official said on Saturday the president has ordered a review of federal programs and funding that enable state and local law enforcement to purchase military equipment.

Images of police wielding military-style guns and armor have alarmed many Americans following violence that was triggered by the fatal shooting of an African-American teenager, Michael Brown, by a white police officer in Ferguson.

Obama wants to know whether the programs, begun after the Sept. 11, 2001, attacks, are appropriate and whether state and local law enforcement are given proper training, the official said.

The review will be led by White House staff including the Domestic Policy Council, the National Security Council, the Office of Management and Budget, and relevant U.S. agencies including the Departments of Defense, Homeland Security, Justice and Treasury, and it will be carried out in coordination with Congress.

Obama signaled that he would review the programs on Monday at a White House news conference when he said he wanted to make sure police were purchasing equipment that they actually need because there is "a big difference between our military and our local law enforcement and we don't want those lines blurred."

“There is a big difference between our military and our local law enforcement. And we don’t want those lines blurred,” he said on August 18 following violent weekend clashes in the Saint Louis suburb, already hinting that such a review was impending.

The review will reportedly monitor the soundness of the programs and the training local police are, or are not, receiving to use the equipment.

The Pentagon has transferred more than $4 billion of equipment including armored vehicles, tents, rifles and night- vision goggles to local and state agencies since 2006, of which about 36 percent involved new equipment.

Over the past year alone, the Pentagon said, it has transferred some 600 armored military trucks known as MRAPS that were built for the war in Iraq.

In addition, the Department of Homeland Security has awarded more than $35 billion in grants over the past decade.

U.S. weapons makers have been eyeing what they call "adjacent" markets for years, keen to drum up fresh demand for products initially developed for the military, and recently, to offset declines in U.S. and European military spending.

Faced with a dwindling number of big-ticket military contracts, even the Pentagon's largest suppliers such as Lockheed Martin Corp and Northrop Grumman Corp are competing for increasingly smaller contracts in commercial or non-military markets, analysts and industry executives said.

Among the products marketed to state and local officials are military-grade communications equipment, radios, night-vision goggles, drones and other surveillance equipment.

But Michael Smith, managing director of the Virginia-based Silverline Group defense consultancy, said local law enforcement agencies accounted for less than 1 percent of the revenues of most defense contractors.

But he said the crisis in Ferguson could help niche firms by increasing demand for cameras, more coordinating centers and better training.

Digital Ally, which makes tiny digital video cameras worn by police officers, and Taser International Inc, which makes stun guns, have seen a sharp increase in interest in their products since Aug. 9, the day of the fatal shooting in Ferguson.

The 1033 program was begun in 1991 to help police forces in the "War on Drugs," and was revamped in 1997 to include counterterrorism activities. Chris Coyne, economics professor at George Mason University in Virginia, said the program expanded sharply after the 2001 hijacked airliner attacks.

Civil unrest in Ferguson began the day after Michael Brown, an unarmed 18 year-old black man, was shot by a white police officer Darren Wilson on August 9.

In the following days, West Florissant Avenue, only a few blocks from the scene of the deadly confrontation, saw violent clashes between heavily armed police and protesters.

On Monday, thousands are expected to attend his funeral at the Friendly Temple Missionary Baptist Church in St. Louis.

The White House announced Saturday that three Obama administration officials would attend the ceremony, including Broderick Johnson, who heads Obama’s My Brother’s Keeper Task Force, which aims to improve the lives of young people of color, Heather Foster and Marlon Marshall.