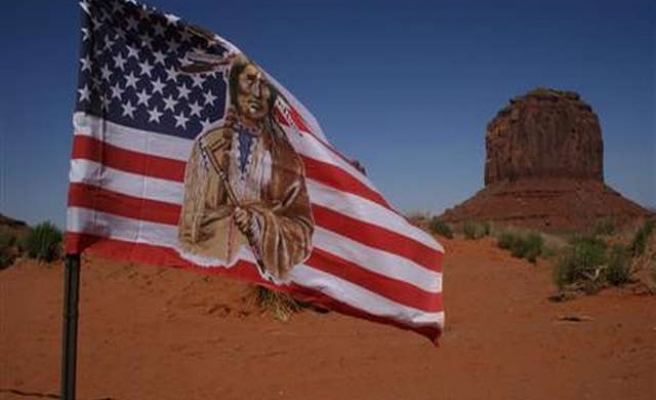 President Barack Obama made his first visit to an American Indian reservation since taking office on Friday in a show of support for improving the plight of a proud people struggling with relentless cycles of poverty.

On a sunny and windy day in North Dakota, Obama and his wife, Michelle, visited the Standing Rock Sioux Tribal Nation in Cannon Ball to demonstrate the administration's commitment to a strong relationship between Washington and tribal nations.

Native Americans, some dressed in full feathered headdresses and multi-colored, beaded outfits, greeted the couple, who met with tribal leaders and young people before attending a ceremony that honored Native American veterans with dance and song.

"We can follow the lead of Standing Rock's most famous resident, Chief Sitting Bull. He said, 'Let's put our minds together to see what we can build for our children,'" Obama said.

Sitting Bull was a Sioux tribal chief who defeated General George Custer at the 1876 Battle of the Little Bighorn.

Obama hugged and posed for a picture with many of the tribal children who attended the ceremony at Cannon Ball's annual flag day ceremony.

The trip is unusual for Obama, who has devoted most of his U.S. travel to highlight programs on the broader economy and other domestic policy priorities. It came just after the president announced at the White House that he and his advisers were reviewing options to help Iraq deal with an insurgency.

Obama courted the American Indian vote as a first-time White House candidate in 2008. He became an honorary member of a tribe in Montana, the Crow Nation, and took on a native name: Black Eagle, which means "one who helps all people of this land."

Since entering office Obama has hosted meetings with tribal leaders every year and proposed a budget increase to support tribal communities. His administration has also settled a series of legal disputes and breach of trust lawsuits by Indian tribes against the United States.

The White House announced new initiatives on Friday including reforms for the Bureau of Indian Education, efforts to bring high-speed Internet to tribal schools, and training for teachers.

It also proposed ways to ease regulatory hurdles for infrastructure and energy development and initiatives to boost small businesses owned by Native Americans.

The trip is part of an administration push to advance rights for Native Americans.