U.S. President Barack Obama and his rival Mitt Romney canceled campaign speeches and some ads attacking each other, Obama ordered U.S. flags on all federal buildings and grounds to be flown at half-staff through Wednesday. 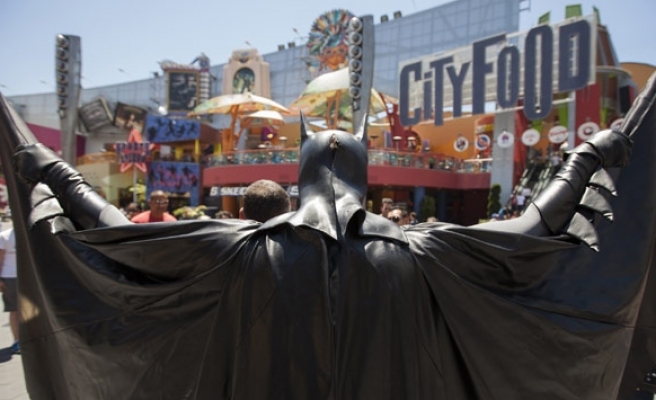 U.S. President Barack Obama and his rival Mitt Romney on Friday canceled campaign speeches and some ads attacking each other, replacing them with expressions of sorrow for the victims of a deadly shooting rampage in Colorado.

Obama, briefed by aides early in the morning, returned to Washington after talking about the shooting during remarks at an event in Fort Myers, Florida. He ordered U.S. flags on all federal buildings and grounds to be flown at half-staff through Wednesday.

A gunman in a gas mask and bullet-proof vest killed 12 people at a midnight premiere of the new "Batman" movie in a suburb of Denver early on Friday, sparking pandemonium when he hurled a gas canister into the auditorium and opened fire on moviegoers.

In addition to the 12 killed, 59 were wounded, according to local law enforcement officials.

As his campaign team pulled down negative campaign ads in Colorado, a somber-looking Obama sought to strike a consoling and uplifting tone to an audience that had turned up expecting a raucous campaign rally.

"There are going to be other days for politics. This, I think, is a day for prayer and reflection," Obama told supporters before asking them to join him in a moment of silence to commemorate the victims of the shooting.

His Republican challenger in the Nov. 6 contest for the presidency also scrapped a campaign speech in New Hampshire and instead delivered remarks of less than five minutes to a quiet crowd.

"Our hearts break with the sadness of this unspeakable tragedy," Romney said. In a statement issued earlier in the day, he said he expected the shooter "will be quickly brought to justice."

Democratic Representative Ed Perlmutter, whose congressional district includes Aurora, where the massacre occurred, said, "I am stunned and furious at the news of the shooting."

He added: "Colorado is not a violent place, but we have some violent people."

In Florida, Obama said, "I'm sure many of you are parents who had the same reaction I did when we heard the news." He added, "My daughters go to the movies. What if Malia and Sasha had been at the theater as so many kids do each day?"

"I hope all of you will keep the people of Aurora in your hearts and minds today. May the lord bring them comfort and healing in hard days to come," he said.

The president had been scheduled to speak at a second campaign event, in Winter Park, Florida. Instead, Air Force One flew back to Washington.

Obama campaign spokeswoman Jen Psaki, who was traveling with the president in Florida, said the campaign had "for the time being" asked television stations to pull campaign ads attacking Romney off the air in Colorado.

Some of the big-spending "super PACs" that are pouring millions of dollars into the 2012 presidential campaigns also called a timeout in their attack ads.

The pro-Obama Priorities USA said it had suspended new Spanish-language ads in Colorado aimed at urging Hispanic voters to go to the polls. Similarly, American Crossroads, which backs Romney, said it was withdrawing its Colorado advertising for now.