Obama says US will persist in protecting Israel

US President Barack Obama stated that US would persist in protecting Israel. 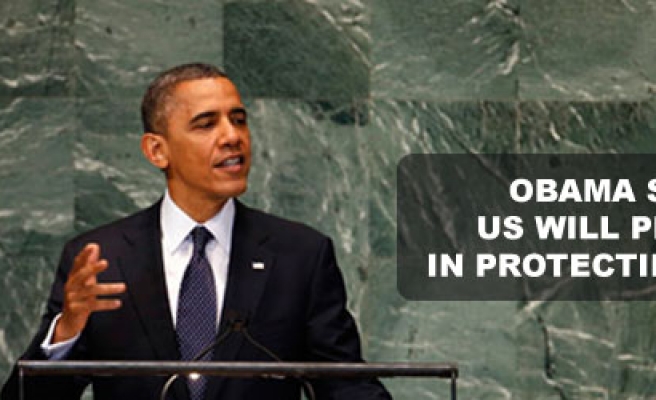 US President Barack Obama laid out his country's future role in the Middle East at the United Nations General Assembly on Tuesday.

Obama called for a firm UN stance on destroying the chemical weapons, in the wake of an agreement between the US and Russia on the issue. "There must be a strong Security Council resolution to verify that the Assad regime is keeping its commitments," he said, referring to the Syria leader's agreement to dismantle its chemical weapons.

"There must be consequences if it fails to do so."

Turning to the subject of Iran's nuclear program, the president said that recent statements from the Iran leadership show that there is basis for agreement, adding that he has directed Secretary of State John Kerry to pursue a deal.

Focusing on the Israeli-Palestinian peace process, which restarted this summer under the auspices of his government, the president said that the Israeli-Arab conflict and Iran would make up the primary diplomatic initiatives going forward through rest of his second term as president.

Real breakthroughs on Iran and Israel-Palestine would have a profound and positive impact on all of the Middle East and North Africa, he said.

"Friends of Israel, including the US, must say clearly that its future depends on the creation of a Palestinian state," Obama told the Assembly.

"The Palestinian people have a right to live in dignity in their own state," he went on, echoing comments he made during a speech in Jerusalem in March.

"The US will always support Israel... as a Jewish state," he stated, but warned that the ongoing occupation in the West Bank was tearing Israel apart.

He also sought to reassure skeptics on American commitment to a long-term role: "We will be engaged in the region for the long haul," he vowed.

He also did not shy away from his previous threat of action against the Syrian regime over chemical weapons attacks.

"The US is prepared to use all elements of our power - including miltary force - to secure our interests in the [Middle East and North Africa]," Obama said. "When its necessary to defend the US against terrorist attacks we will take direct action."