Obama to ISIL: America does not forget

Barack Obama vowed "justice will be done" against the killers of American journalist James Foley as the United States sought to identify targets for potential airstrikes in Syria. 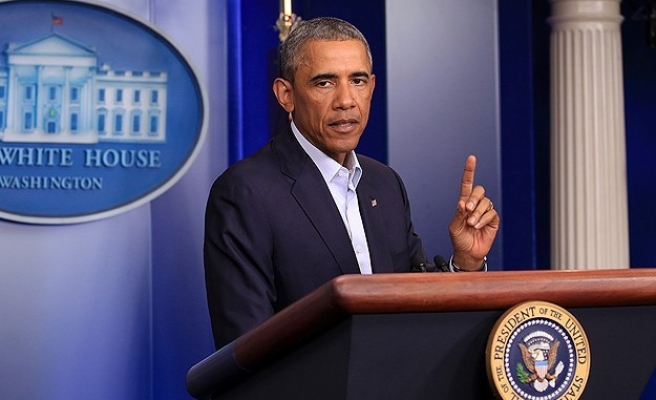 U.S. President Barack Obama vowed justice for the American journalist who was executed by ISIL militants, one week after the video of his killing was released by the militant group.

"We have proved time and time again we will do what’s necessary to capture those who harm Americans," Obama said to loud applause while addressing the American Legion's National Convention in North Carolina on Tuesday. "Our message to anyone who harms our people is simple: America does not forget, our reach is long, we are patient, justice will be done."

On Aug. 19, the group uploaded a video onto YouTube that has since been authenticated by U.S. intelligence to be that of the beheading of journalist James Foley. He was seized in November 2012 in northwestern Syria, and was held hostage since.

Iraqi and Kurdish forces have made some gains against the group with the backing of U.S. airstrikes, most notably retaking Iraq's largest dam from the militants.

Eliminating the group outright, however, will likely be a longer-term commitment.

"Rooting out a cancer like ISIL won’t be easy and it won’t be quick," Obama said. "But tyrants and murderers before them should recognize that kind of hateful vision ultimately is no match for the strength and hopes of people who stand together for the security and dignity and freedom that is the birthright of every human being."

U.S. officials elaborated on their case for why the group posed a national security threat, saying foreigners from Western countries who are fighting for ISIL could later return to their home countries and launch attacks against civilians.

"If left unchecked, the group could one day pose a more direct threat to the U.S. homeland and other countries beyond the region," said deputy White House press secretary Shawn Turner.

Launching air strikes into Syria would add an unpredictable element to a civil war that Obama has taken great pains to stay out of. A year ago he stepped back from attacking the government of Syrian President Bashir al-Assad for using chemical weapons on his own people.

Finding ISIL targets inside Syria would be a daunting task given the difficulty of gathering intelligence on the locations of the militants. A key area of focus was believed to be the northern city of Raqqa, the group's Syrian stronghold.

Analysts said the United States was scrambling to gather intelligence.

White House spokesman Josh Earnest said there was no plan to coordinate with the Syrian government on how to counter the threat from ISIL. Syria has appealed for coordination.

Earnest said the crisis in the region caused by ISIL's rapid advance could not be solved by U.S. military power alone and would require the involvement of other countries.

General Martin Dempsey, chairman of the Joint Chiefs of Staff, said last week that ISIL would eventually need to be addressed on "both sides of what is essentially at this point a non-existent border" between Syria and Iraq.

Dempsey's spokesman confirmed on Monday that options against ISIL were under review and stressed the need to form "a coalition of capable regional and European partners."

He said Dempsey was working with U.S. Central Command, which is responsible for American forces in the Middle East, to prepare options to address ISIL in both Iraq and Syria "with a variety of military tools including air strikes."