'It's sometimes easy to forget how truly remarkable our relationship is,' Obama says regarding his friendship with Canadian Prime Minister Justin Trudeau 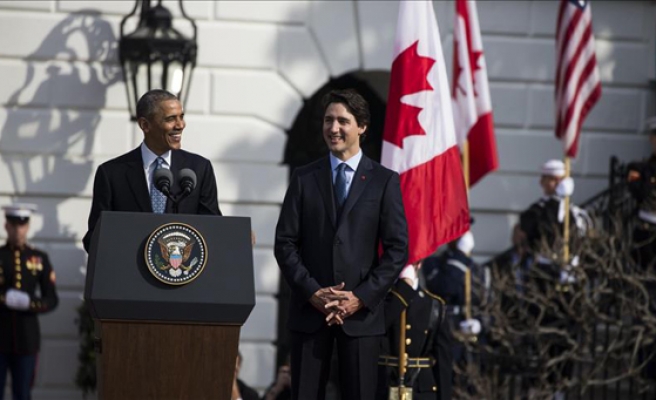 At a news conference in the White House’s Rose Garden after a state arrival ceremony full of all the associated pomp and circumstance, the leaders lauded their shared ties.

“We've woven together so deeply as societies, as economies, that it's sometimes easy to forget how truly remarkable our relationship is,” Obama said.

Trudeau, who is the first Canadian prime minister to make an official visit to the White House in nearly two decades, added, “if geography made us neighbors, then shared values made us kindred spirits, and it is our choices individually and collectively that make us friends”.

The leaders vowed to make it easier for goods and people to cross their shared border while also agreeing to increase information sharing to combat the flow of foreign fighters.

New measures will include shared access to no-fly lists and full implementation of a joint entry-exit system “as we uphold the privacy and civil liberties of our respective citizens”, Obama said.

Canada is the U.S.’s largest trade partner with nearly 400,000 people and $2 billion worth of goods and services crossing the border daily, according to the White House.

Just as importantly, the leaders vowed to step up joint action on climate change, announcing a new climate and science partnership to protect the Arctic, and efforts to reduce methane emissions by nearly half from the oil and gas sector, reduce the use of and emissions from hydrofluorocarbons, and align emission standards for heavy-duty vehicles.

The two leaders desire a “clean growth economy that continues to provide good jobs and great opportunities for all of our citizens,” Trudeau said. “By working together, we'll get there sooner than we think,” he added.

In a moment of levity, Trudeau lamented that when he departs Washington he will leave behind his “beloved Expos” -- a reference to Montreal’s former baseball team that moved to Washington in 2005 and became the Nationals.

“There are some things we will probably never agree on: Whose beer is better. Who’s better at hockey,” Obama said. “Where’s the Stanley Cup right now?” he asked jokingly, referring to the National Hockey League’s championship trophy, before implicitly answering his own question.