Obama vows U.S. will not fight another ground war in Iraq

Obama stressed that airstrikes would be the central U.S. contribution to the fight against ISIL, along with coordinating a coalition that he said now includes more than 40 countries 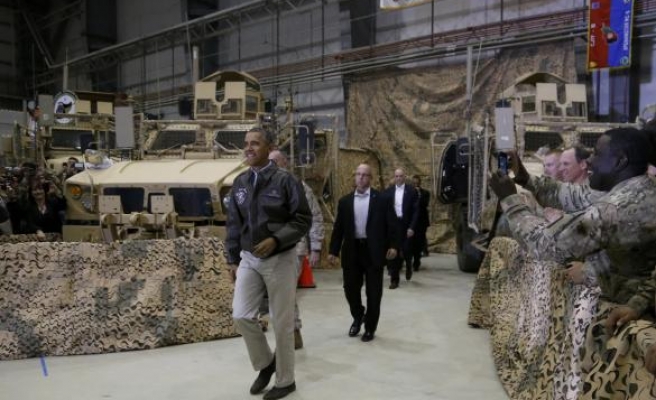 President Barack Obama vowed on Wednesday the United States will not fight another ground war in Iraq, seeking to reassure Americans about the level of U.S. involvement after a top general suggested combat troops could be deployed against ISIL forces.

Obama, who has spent much of his presidency distancing himself from the Iraq War, stressed during a speech at MacDill Air Force Base in Tampa that airstrikes would be the central U.S. contribution to the fight against ISIL, along with coordinating a coalition that he said now includes more than 40 countries.

"I want to be clear. The American forces that have been deployed to Iraq do not and will not have a combat mission," Obama said.

"We will train and equip our partners. We will advise them and we will assist them. We will lead a broad coalition of countries who have a stake in this fight."

His message came a day after General Martin Dempsey, chairman of the U.S. military's Joint Chiefs of Staff, left the door slightly ajar to the possibility of some ground forces during congressional testimony that worried some Democrats.

"As your commander in chief I will not commit you and the rest of our armed forces to fighting another ground war in Iraq," Obama said.

The United States has launched more than 160 airstrikes against ISIL targets in several areas in Iraq and Obama has authorized similar attacks against the group's strongholds in Syria.

More than 1,600 American advisers have been dispatched to help Iraqi forces but Obama does not want them to get involved in ground combat to avoid a repeat of the Iraq War begun by his Republican predecessor, George W. Bush.

In testimony to a Senate committee on Tuesday, Dempsey outlined scenarios in which he might recommend having U.S. troops do more, potentially accompanying Iraqis during complicated offensives, such as a battle to retake the northern city of Mosul from ISIL fighters.

The statement rattled some Democrats who worry about getting sucked into another war in Iraq.

"It's for me a blanket 'no,'" said Nancy Pelosi, the top Democrat in the Republican-controlled House of Representatives. "I don't think the American people are up for it."

But former Defense Secretary Robert Gates told CBS's "This Morning" that Dempsey's remark made sense because air power alone has its limitations.

"The reality is they're not going be able to be successful against ISIS strictly from the air," he said, using an acronym for ISIL.

Obama sketched out a large but limited U.S. role, saying more than 40 countries were contributing to the coalition effort. He is to discuss the effort further at the U.N. General Assembly next week.

Obama also is seeking congressional backing for his strategy. The House of Representatives is due to have two votes later on Wednesday - one a stopgap spending bill to keep the government open after the fiscal year ends on Sept. 30, and the other on an amendment to that bill that would authorize Obama's mission to equip and train Syrian rebels to battle the ISIL group.

If the bills pass the House, they would be sent to the Senate for a vote expected later this week.