Obama warns of 'big gap' in nuke talks with Iran

U.S. president says there is a "big gap" in nuclear talks with Iran which may end the talks up in failure. 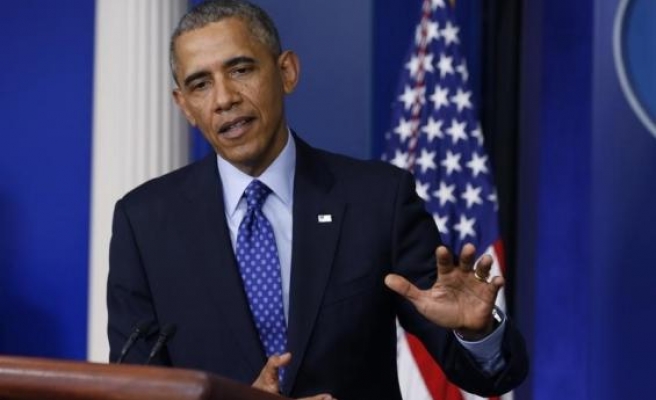 There is still a "big gap" in nuclear talks with Iran which has the potential to make the parties off the table, U.S. President Barack Obama said Sunday ahead of the Nov. 24 deadline of the extended talks between Iran and world powers.

Iran, the United States and the European Union began an unscheduled second day of talks in Oman on Monday on disagreements hindering resolution of a confrontation over Tehran's nuclear programme.

With two weeks to a deadline for an overall agreement, Iranian Foreign Minister Mohammad Javad Zarif, U.S. Secretary of State John Kerry and EU envoy Catherine Ashton met in Oman's capital Muscat to tackle a decade-long dispute that has raised the risk of wider conflict in the Middle East.

Permanent five members of the UN Security Council; U.S., UK, France, China and Russia; plus Germany have been negotiating with Iran on its nuclear program to prevent it to develop a nuclear weapons and rollback the current program since last year November.

"They have abided by freezing their program and, in fact, reducing their stockpile of nuclear-grade material. Or weapons-grade nuclear material," Obama told Bob Schieffer, CBS moderator of the Sunday public affairs talk show, Face the Nation.

He said that they have been negotiating with Iran to push it to that end so that the sanctions on Iran can be reduced, or lifted.

"There's still a big gap. We may not be able to get there," he added noting that they need to have a verifiable lock-tight assurances that Iran would not develop a nuclear weapon.

Obama also answered the allegations that he had secretly corresponded with Iranian Supreme leader Ali Khamenei.

He did not contradicted the reports of the the secret correspondence with Khamenei.

Noting that they have two big interests in Iran in long and short term, he said that the number one interest with number one priority is to make it roll back its nuclear program while the second interest lies in its influence over Shias in Iraq and Syria.

"The second thing that we have an interest in is that Iran has influence over Shia, both in Syria and in Iraq, and we do have a shared enemy in ISIL," Obama said.

However, he underlined that the nuclear negotiations are separate from the issue of ISIL.

"We're not coordinating with Iran on ISIL. There is some deconflicting, in the sense that since they have some troops or militias they control in and around Baghdad, yeah, we let them know, don't mess with us, we're not here to mess with you," he said.

Obama also noted that there will be no coordination or common battle plan with Iran as the U.S. still have big differences with Tehran's behavior vis-a-vis U.S. allies such as sponsoring terrorism in the region, its anti-Israeli rhetoric and behavior.