The first "confession" of Canadian prisoner Omar Khadr was the words of a scared and wounded child, his attorney told in the tribunal. 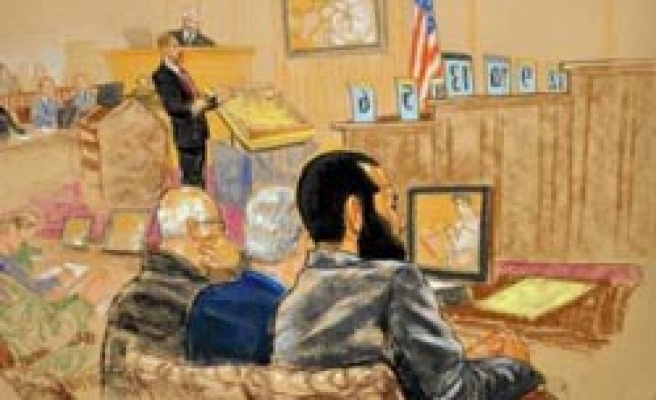 The first “confession” of Canadian prisoner Omar Khadr was the words of a scared and wounded child whose interrogators frightened him into giving a false confession by making up a tale of a young boy gang-raped and killed in prison, his attorney said in the Guantanamo tribunal on Thursday.

"It is only after that story is told to Omar Khadr that he admits to throwing anything. He told them what they wanted to hear," Army Lieutenant Colonel Jon Jackson said in defense opening statements.

Khadr is the first person since World War Two to face trial in a military tribunal for acts allegedly committed as a minor.

In the tribunal, a prosecutor had told Omar Khadr told interrogators he was an al Qaeda terrorist and described pulling the pin of a grenade that killed a U.S. soldier in Afghanistan.

The first day of testimony ended early and dramatically when Jackson fainted in the courtroom. He was questioning a witness, asked for a recess and fell to the floor with a thud.

Jackson suffered complications related to recent gall bladder surgery and was in the base hospital, Deputy Chief Defense Counsel Bryan Broyles said on Thursday night. Jackson is Khadr's only lawyer and the trial cannot resume until he is medically cleared, Broyles said.

Toronto-born Khadr was 15 when captured during a firefight in Afghanistan in 2002.

There is only fourth Guantanamo detainee to be convicted since the prison, which has held nearly 800 men, was opened in 2002.

The United Nations said earlier this week that the trial at the Guantanamo Bay naval base was of dubious legality and could set a dangerous precedent for child soldiers worldwide.

Human rights groups say the commissions violate detainees' legal rights and remain unconvinced by the administration's promise to refer as many cases as possible to civilian courts.

Now 23, Khadr is accused of killing 1st Sergeant Christopher Speer with a grenade during the battle and making roadside bombs to target U.S. troops.

Jackson said Khadr was in the compound with three "bad men" and that one of them threw the grenade that killed Speer before being fatally shot himself by the U.S. troops.

"Omar Khadr did not kill Sergeant Speer. He has been waiting eight long years to tell you that. To tell somebody who can finally listen and who can finally make a difference," Jackson told the jury.

Khadr was in the compound only because his father, Ahmed Khadr, took him there to translate for the bomb-makers, he said. "He was there because Ahmed Khadr hated his enemies more than he loved his son," Jackson said.

But prosecutor Jeff Groharing said Khadr was raised in a family of what he said “extremists” who spent holidays with “Osama bin Laden, trained their boy to use bombs and guns and encouraged him to kill Americans.”

"I am a terrorist trained by al Qaeda -- those are Omar Khadr's own words," Groharing told the seven military officers on the jury. "Those words were confirmed by his acts."

Human rights groups and others have harshly criticised the prison that has undermined the reputation of the United States worldwide because of its illegal position. Many prisoners have been held for years without charges, and rights groups say U.S. forces have commited torture, abuse and renditon.