A strong earthquake rattled the U.S. East Coast, sending tremors as far as Canada, damaging well-known buildings in the nation's capital and sending scared office workers into the streets. 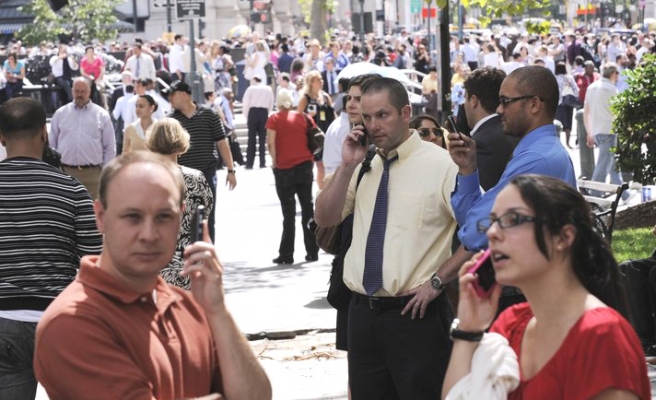 A strong earthquake rattled the U.S. East Coast on Tuesday, sending tremors as far as Canada, damaging well-known buildings in the nation's capital and sending scared office workers into the streets.

There were no reports of major damage or serious injuries from the 5.8 magnitude quake, which was centered in Mineral, Virginia, about 90 miles (145 km) southwest of Washington, D.C.

It was the largest quake in Virginia since 1897 and struck at a shallow depth, increasing its potency.

The Pentagon, White House and U.S. Capitol were evacuated in Washington, and thousands of alarmed workers scurried into the streets up and down the East Coast as the lunchtime quake sent items crashing down from store and office shelves.

"We were rocking," said Larry Beach, who works at the U.S Agency for International Development in downtown Washington. "It was definitely significant."

Washington's National Cathedral, host to state funerals and memorial services for many U.S. presidents, suffered damage with three spires in the central tower breaking off.

The U.S. East Coast does not normally experience quakes as strong as Tuesday's. The U.S. Geological Survey said the quake was of 5.8 magnitude, downgrading an earlier estimate if 5.9.

Earthquakes of magnitude 5.5 can cause damage to buildings and other structures.

In addition to the Virginia earthquake, there were nine tremors in the area immediately around Cokedale, Colorado, near the border of New Mexico.

"Today we had two significant earthquakes shake large portions of the country," said David Wald, a geophysicist with the USGS.

"The Western earthquake, magnitude 5.3, within the last 24 hours, shook roughly four western states, primarily Colorado and New Mexico, but also parts of Kansas, Oklahoma as well as Texas -- large states, but probably experienced by tens of thousands of people," he said.

As if a rare strong earthquake were not enough, the East Coast was also on alert for powerful Hurricane Irene which was heading up from the Caribbean and could hit at the weekend.

The quake made chandeliers sway in the U.S. Capitol and the floor of the U.S. Senate shook before staff headed for the exits. Some minor damage could be seen in the rotunda, under the dome of the Capitol.

Bits of paint and plaster fell from high on the walls and chunks of plaster fell fell from above a doorway in the Capitol's Statuary Hall. The U.S. Congress is in recess so most members were away.

"I thought at first somebody was shaking my chair and then I thought maybe it was a bomb," said Senate aide Wendy Oscarson-Kirchner.

There were also nuclear safety fears when one of four emergency diesel generators at the North Anna nuclear power plant in Virginia lost power due to the quake and automatically halted operations.

The plant operated by Dominion Resources was designed to withstand an earthquake of magnitude up to 6.2, a company spokesman said. Dominion reported no major damage to the facility.

Three generators were needed to kick in and keep the reactors' radioactive cores cool. A fourth diesel unit failed.

"What a spooky, strange feeling," said Billy Simeonidis, the owner of BareBurger in Brooklyn. "You just don't have any control. I don't know how they do it on the West Coast."

The quake was felt as far away as Toronto. Buildings in Boston were evacuated, and some people who experienced swaying offices said they felt their stomachs turn.

"We see we had shaking from Canada and Maine all the way down to Georgia and in Michigan and Illinois. So this was over about 20 states," said the USGS's Wald.

"East Coasters freak out, West Coasters roll their eyes," read one headline accompanying a story about Twitter reactions on the Hollywood website The Wrap.com.