India led calls for U.S. to intervene to halt a small church's plan to burn copies of the Koran in anniversary of the Sept. 11 attacks. 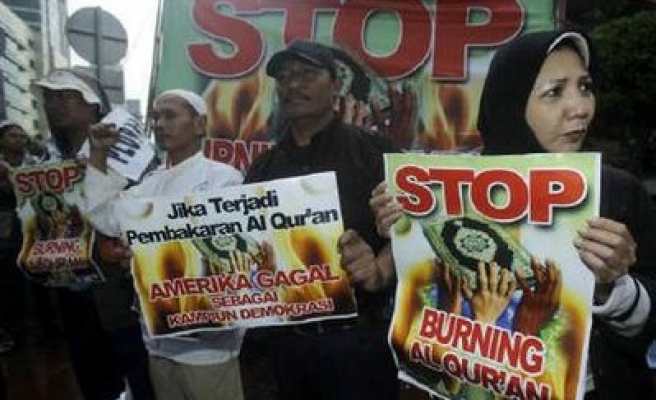 India led calls on Thursday for the United States to intervene to halt a small church's plan to burn copies of the Koran in anniversary of the Sept. 11 attacks which coincides with Muslim holiday this year and urged a media blackout to calm tensions.

The pastor of the obscure Christian church in the southern U.S. state of Florida has vowed to go ahead with the plan despite global outrage and warnings his action could endanger U.S. troops in Afghanistan, where there have already been angry protests.

The U.S. government and military and political and religious leaders from around the world have condemned the plan by pastor Terry Jones, whose tiny Protestant church campaigns against Islam.

The ninth anniversary of the Sept. 11 hijacked airliner attacks on the United States coincides with celebrations for the end of the Muslim fasting month of Ramadan. The Koran-burning plan has added to what U.S. religious leaders have called an "anti-Muslim frenzy".

Indian Home Minister Palaniappan Chidambaram said no one who was interested in "harmony and peace" could condone the plan.

"We hope that the U.S. authorities will take strong action to prevent such an outrage being committed," Chidambaram said in a statement, calling on the media to exercise restraint.

"While we await the action of the U.S. authorities, we would appeal to the media in India -- both print and visual media -- to refrain from telecasting visuals or publishing photographs of the deplorable act," he said.

Two of the top U.S. commanders in Afghanistan have said the Dove World Outreach Center plan risked undermining U.S. President Barack Obama's efforts to reach out to the world's 1.5 billion Muslims. General David Petraeus, commander of U.S. and NATO forces in Afghanistan, said it could endanger his troops.

The Convocation of American Churches in Europe also said Christians living in majority Muslim countries would also be at risk of reprisals.

Streets were quiet in the Afghan capital on Thursday as Eid al-Fitr celebrations approached, but police have been put on alert after angry demonstrations earlier this week when hundreds of Afghans, mostly students from religious schools, gathered outside a Kabul mosque chanting "Death to America".

German Chancellor Angela Merkel spoke of the importance of freedom of speech at a ceremony for the Dane whose cartoon provoked protests that led to 50 deaths. Her tribute drew criticism from some Muslims in Germany.

A British Muslim member of the European Parliament urged restraint if Jones went ahead with the plan. "Muslims globally must know that, through this Koran burning, this man will achieve nothing," said MEP Sajjad Karim.

Pakistan "urged the international community to discourage this fanatic approach and take steps to stop these fundamentalists", a Foreign Office spokesman said in an Associated Press of Pakistan report.

Indonesian President Susilo Bambang Yudhoyono, leader of the world's most populous Muslim nation, was to ask Obama to intervene, an aide said on Thursday.

"President Yudhoyono thinks that if this was allowed to happen, it will disturb world peace," Heru Lelono told Reuters.