The tornado was the first in Los Angeles since 2004, according to USTornadoes.com which tracks twisters. 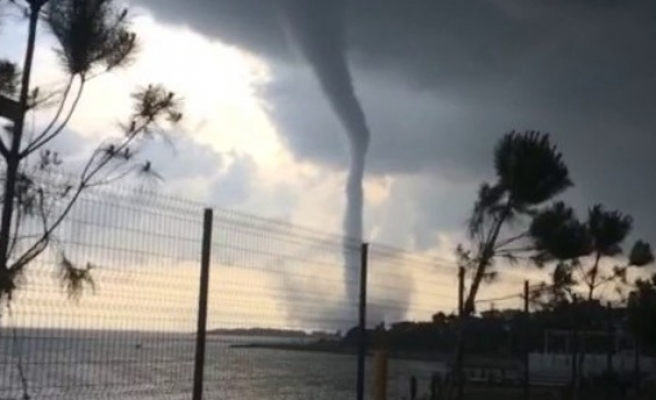 A Pacific storm pounded Southern California with heavy rain and high winds on Friday, triggering a small tornado, flash floods and mudslides that prompted the evacuation of hundreds of homes, damaged dozens of others and disrupted passenger rail services along the coast.

One person was found dead on Friday in a rain-swollen flood-control channel in the Orange County town of Garden Grove, which could mark the third storm-related fatality on the West Coast since Thursday.

Separately, rescue teams saved two people after they were swept away in the fast-moving Los Angeles River near a homeless encampment, the Los Angeles Fire Department said in Twitter messages.

High winds tore down power lines throughout the region, leaving as many as 78,000 customers without electricity at one point after the storm moved in before dawn, utility officials reported.

In an unusual phenomenon for Southern California, a small tornado touched down in South Los Angeles, where it damaged the roofs of an apartment complex and two houses and ripped up a billboard, said National Weather Service Specialist Stuart Seto. The twister was an EF0, the smallest category possible, and no one was hurt, he said.

The tornado was the first in Los Angeles since 2004, according to USTornadoes.com which tracks twisters. Weather Service meteorologists could not confirm that.

A water spout, which is like a tornado but occurs over water, was sighted over the ocean near Los Angeles International Airport on Friday morning, and another one formed 35 miles (56 kms) to the southeast off Newport Beach.

The severe weather, which included thunderstorms, was spawned by a storm system dubbed a "pineapple express," a large low-pressure area that siphoned vast amounts of moisture from the tropical Pacific near the Hawaiian islands and dumped it on the West Coast as it moved over land, the National Weather Service said.

The same storm pummeled the Pacific Northwest and the northern half of California on Thursday with downpours and gale-force gusts that caused widespread power outages and disrupted commercial flights in San Francisco.

One of the areas hardest hit on Friday was the community of Camarillo Springs, north of Los Angeles, where boulder-strewn rivers of mud swept down hillsides that a wildfire had stripped of vegetation last year.

Dozens of homes were damaged, and at least 10 were red-tagged as unsafe to enter, Ventura County authorities said.

Mounds of rock were left piled against several houses up to their roofs in the area. Authorities ordered the evacuation of more than 100 homes deemed to be at risk in the area.

About 1,000 homes were placed under evacuation orders in the Los Angeles suburb of Glendora, where mudslides from a wildfire-burned area there left several roads impassable overnight, police Lieutenant Matt Williams said.

The highest rainfall measured on Friday was at San Marcos Pass, just north of Santa Barbara, where more than 5 inches (12 cm) fell. Downtown Los Angeles had more than 1.5 inches (3.8 cm) of rain.

Harsh weather was blamed for two deaths on Thursday in Oregon. In southern Oregon near Ashland, a homeless man camping with his 18-year-old son was killed when a tree toppled onto their tent. Portland police said a tree fell on a car that then swerved into another tree, killing a boy who was a passenger.

It was not known whether the body in Garden Grove was a weather-related fatality or a victim who died of some other cause and was washed into the flood channel, officials said.

The storm was expected to provide little relief from the multi-year drought that has forced sharp cutbacks in irrigation supplies to farmers and conservation measures across California.