Plane crashes at Nevada air race in US

At least 15 people were in critical condition after the crash at the Reno Air Races, which a spokesman for the event called a "mass casualty situation" in a written statement. 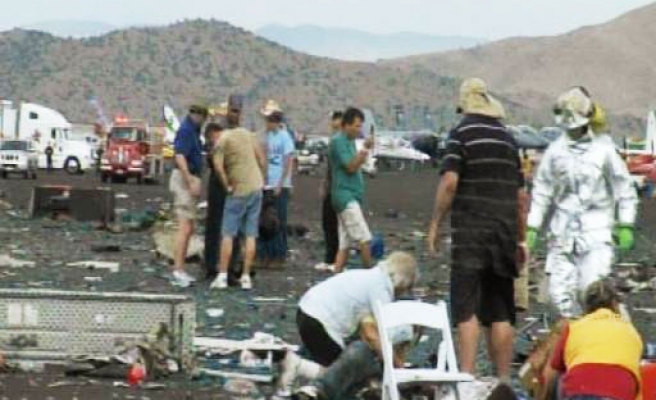 A vintage World War Two fighter plane crashed near the grandstand at a Nevada air race on Friday, killing at least three people, including the elderly pilot, and injuring more than 50, officials said.

At least 15 people were in critical condition after the crash at the Reno Air Races, which a spokesman for the event called a "mass casualty situation" in a written statement.

The plane, a P-51 Mustang dubbed the "Galloping Ghost" that was being flown by pilot Jimmy Leeward, crashed into a box seat area in front of the main grandstand about 4:20 p.m. PDT (2320 GMT), said Mike Draper of the public relations firm R&R Partners, which represents the race.

Video apparently taken from the stands and posted on YouTube showed a plane plunging nose-down into the tarmac as spectators were heard gasping: "Oh, my God."

"I heard his engine and looked up. He was within 100 feet (30 metres). He was coming right down on top of us," witness Fred Scholz told CNN. "It just happened very quick."

The Federal Aviation Administration halted the air race after the crash, and was investigating the incident alongside the National Transportation Safety Board, an FAA official said.

"It was like a war zone where the box seats were," said Dean Davis, an Oregon man who has attended the Reno Air Races for decades. "All the people were laying there."

The head of the Reno Air Racing Association, Michael Houghton, put the number of injured at 54 and said the 74-year-old pilot was killed. He had previously put the pilot's age at 80.

Renown Regional Medical Center spokesman Dan Davis said that at least two people were killed -- a man and a woman. An event spokeswoman said the pilot had died in addition to the two confirmed dead by Renown.

Stephanie Kruse, a spokeswoman for the regional emergency medical service authority, said 15 of the injured were in critical condition

Mark Hasara of Cedar Rapids, Iowa, an Air Force veteran who witnessed the crash, told Reuters, "As soon as I saw his nose pointed at the ground, I knew he wasn't going to recover."

In a June video posted at the website for the air race, Leeward said the Galloping Ghost raced from 1946 to 1950 in the Cleveland Air Races and afterward in other events.

He said his crew cut 10 feet (3 metres) off the plane's length and made other modifications to improve its aerodynamic abilities and reach speeds of 500 mph (800 kph).

Leeward came from an aviation family -- he was the son of a pilot, and his own sons have also flown planes. He worked as a stunt pilot on a few movies, including the 2002 release "Dragonfly."

The Reno crash was the latest in a spate of fatal air show accidents in the United States since August.

Last month, the pilot of an aerobatic airplane died in a fiery crash in front of shocked onlookers at a weekend air show in Kansas City, Missouri. In Michigan last month, a wingwalker at an air show near Detroit plunged about 200 feet (60 metres) to his death as he tried to climb onto a helicopter in midair.

The Reno Air Races, which began in the mid-1960s, features planes facing off in races at an airfield north of the city.