Joe Biden is due to make remarks at the service for Rafael Ramos, whose death, alongside his partner Wenjian Liu, has become a rallying point for police and their supporters around the country 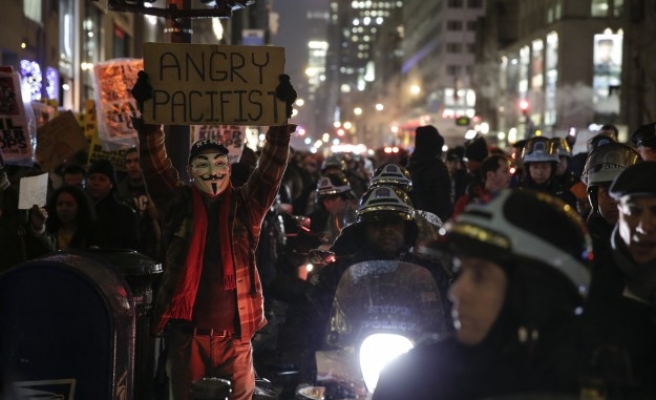 Tens of thousands of police from cities across the United States filled a New York City church and nearby streets on Saturday at the funeral for one of two police officers shot by a man who said he was avenging the killing of unarmed black men by police.

Mid-way through one of the most heavily attended funerals in the New York Police Department's history, New York City Mayor Bill de Blasio walked past U.S. Vice President Joe Biden and other dignitaries to give his eulogy for Officer Rafael Ramos.

As the mayor started speaking, thousands of uniformed officers outside silently turned their backs on him in a pointed display of protest as his image filled the large screens broadcasting the service.

Angered by the mayor's qualified support for nationwide demonstrations against the deaths of unarmed black men at the hands of police, some New York police officers had similarly shunned de Blasio as he arrived a week ago at the hospital where Ramos and his police partner, Wenjian Liu, were declared dead.

"He believed in protecting others," de Blasio said as he stood behind Ramos' coffin, which was bathed in blue light, "and those who are called to protect others are a special breed."

Singled out for their uniforms, the slaying of Ramos, 40, and Liu, 32, as they sat in their patrol car has become a rallying point for police and their supporters around the United States, beleaguered by months of street protests accusing police of racist practices.

Offering a counter-narrative to the anti-police chants at many protests, Vice President Biden made the first of several speeches that touched on the marked increase in the racial diversity of the city's police force, which only a few decades ago was almost entirely white.

"I believe that this great police force of this incredibly diverse city can and will show the nation how to bridge any divide," Biden said during the service at Christ Tabernacle Church in the suburban Queens neighborhood in which Ramos lived with his wife, Maritza, and their two teenage sons.

New York Governor Andrew Cuomo said the department had officers who had migrated to New York City from more than 50 different nations and included speakers of 64 languages. He went on to criticize some of the protesters who have held rallies in the city on a nearly daily basis.

"The NYPD protected the right of free speech even though they themselves were the targets of false and abusive tirades by some," he said.

Streets outside the church were filled for blocks with neat, quiet crowds of officers in blue uniform, including delegations from Boston, Atlanta, St. Louis and New Orleans. A police spokesman said the department did not estimate the number of people who attended department funerals, but Biden said some 25,000 people were thought to have come.

Before joining the police department relatively late in his career, Ramos had worked as a school safety officer. A regular face as an usher at Christ Tabernacle, he had nearly completed a course to become a police chaplain.

Bill Bratton, the city's police commissioner, said during the service that he had posthumously appointed Ramos to the position.

Relatives and close friends of Ramos, many of whom knew him as Ralph, recalled him as a man devoted to his church and to calling the people he loved frequently just to see how they were.

The officers' killer, Ismaaiyl Brinsley, 28, fatally shot himself soon after the attack, and had earlier that same day shot and wounded his former girlfriend in Baltimore.

Brinsley, who was black, had written online that he wanted to kill police to avenge the deaths of Eric Garner and Michael Brown - unarmed black men killed by white policemen in New York and Ferguson, Missouri.

Their deaths and the decisions not to prosecute the officers responsible ignited nationwide protests, renewing a debate about race in America that has drawn in President Barack Obama.

Ramos' family has said it welcomed the mayor at the funeral, but many of those outside who did not turn their backs on him said they sympathized with the gesture.

"A lot of people feel he has taken a side, and that side is not ours," a New York police officer said on condition that her name not be used because officers are not allowed to talk to reporters without clearance.

Patrick Lynch, president of the city's Patrolmen's Benevolent Association, said a week ago at the hospital where Liu and Ramos were taken that the mayor had "blood on his hands."

"We have to understand the betrayal that they feel," Lynch, in an interview outside the church with CNN, said of the officers who turned their backs. "The feeling is real, but today is about mourning. Tomorrow is about debate."