Pro-Palestinian protesters rally across US

Demonstrators across US demanded an end to Israeli aggression and occupation 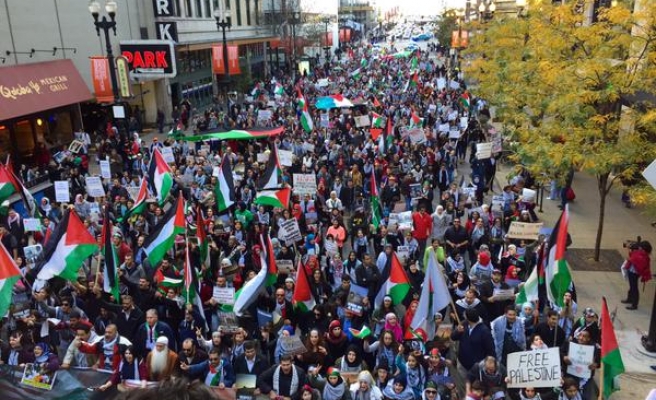 Thousands of people marched across the U.S. in support of Palestinians, and against Israeli use of force in the ongoing Palestinian-Israeli tensions witnessed in New York and Chicago on Sunday.

"Free Palestine," the protesters chanted as they waved a massive Palestinian flag making their way down Manhattan to Times Square, where the crowd grew larger. Shutting down traffic, the activists took turns addressing the public.

Hosted by NYC Students for Justice in Palestine as part of NY4Palestine wider movement, the crowd condemned Israel's aggression in the recent violence recently on the rise across Israel, the West Bank and Gaza.

Some Jewish activists joined the rally in support of the Palestinian cause and in protest to PM Benjamin Netanyahu's policies as well, arguing that the state of Israel does not represent world Jewry.

The rally in Chicago also attracted thousands who descended on the down town with Palestinian flags and placards denouncing Israeli aggression.

Organized by the Coalition for Justice in Palestine, activists rallied downtown near Congress and Michigan Avenue as they too demanded an end to Israeli aggression and occupation.

The protesters also spoke out against their taxes being used by the U.S. government to support the state of Israel. They have also urged the onlookers to boycott Israel and hold it responsible for what they say are numerous violations of human rights.