The killings and decisions by grand juries to return no indictments against officers involved in them have rekindled a national debate over race relations in the United States. 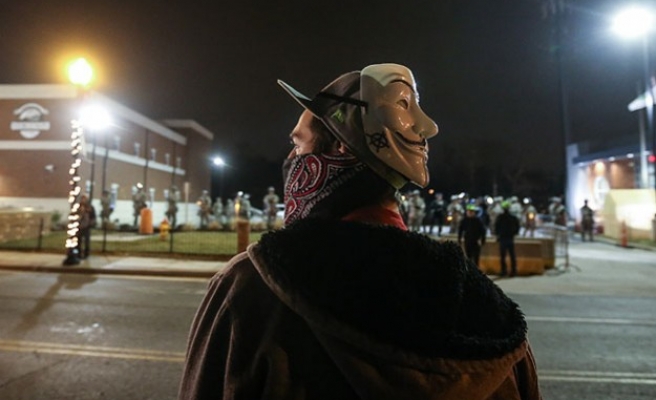 A fourth night of demonstrations against police violence got off to a slow start on a rain-soaked Saturday in New York, after mourners held a funeral for a black man shot dead by a white police officer in the stairwell of a Brooklyn apartment house.

The shooting of Akai Gurley, 28, at a public housing project last month was the latest in a series of incidents fueling outrage over what protesters say is a pattern of excessive force being used by law enforcement against African-Americans.

The killings and decisions by grand juries to return no indictments against officers involved in them have rekindled a national debate over race relations in the United States.

The district attorney in the New York City borough of Brooklyn said on Friday a grand jury would consider charges against Peter Liang, the officer who shot Gurley. Police have said Liang may have accidentally discharged his gun.

In Brooklyn, mourners gathered on Saturday morning at Baptist church to remember Gurley, the father of a 2-year-old girl. Afterwards about 75 people gathered for a vigil and brief march in his memory.

Clinton Jordan, a 40-year-old security administrator at John F. Kennedy International Airport, was born and raised in the Louis H. Pink housing project where Gurley was shot. He said residents felt a mixture of anger and resignation.

"You know in this neighborhood you've seen a lot of police brutality to the point where we're just fed up," he said.

Elsewhere in New York, demonstrations were even more restrained than on Friday, when arrests numbered only 20.

"Seems to be the weather, it's not really making it easy," said a police officer in Times Square who saw about 200 people march through the busy area during the afternoon.

A dozen protesters lay down again on the floor in New York's Grand Central Terminal in one of the now-familiar "die-ins" featured in the wave of protests this week. Tourists and commuters snapped pictures of the silent protest.

"The fact that people are mobilizing is a great thing," said Amine Lazreg, a 24-year-old from Montreal, while sitting in a coffee shop in Times Square. "This type of protest is for social justice -- I don't know anyone who would go against that."

Protesters and police alike have showed restraint and no major violence has flared in New York, but a protest in Berkeley that began peacefully turned violent when some demonstrators smashed store windows and hurled objects at police, who then fired tear gas and rubber bullets, video footage on local news showed.

One man smashed a grocery store window with a skateboard as others proceeded to loot the store, the KTVU-TV video showed.

Berkeley officer Jennifer Coats said police were pelted by missiles from a splinter group of protesters and confirmed that smoke and tear gas had been fired.

One officer hit by a sandbag suffered a dislocated shoulder, while police vehicles and private cars were vandalized, Coats said, while at least two other businesses were looted. She did not have any figures on arrests.

The disturbance forced the closure of the local Bay Area Rapid Transit station.

The demonstrations began on Wednesday after a grand jury decided to bring no charges against Daniel Pantaleo, a New York City police officer, in the July death of Eric Garner, a 43-year-old father of six.

That decision was announced nine days after a Missouri grand jury chose not to indict a white policeman for the shooting dead in August of an unarmed black teenager, spurring two nights of violence and arson in a St. Louis suburb.

Protests have erupted across the country. On Saturday, hundreds of people in Hartford, Connecticut, marched for nearly two miles in the pouring rain to a rally at a city park.

Protests are scheduled for Sunday for New York, Chicago, Philadelphia, Miami and Minneapolis and dozens of other cities.