The Central Intelligence Agency’s torture of detainees was developed by two contractors who were eventually paid $81 million for their work, according to a Senate Intelligence Committee report on the program. 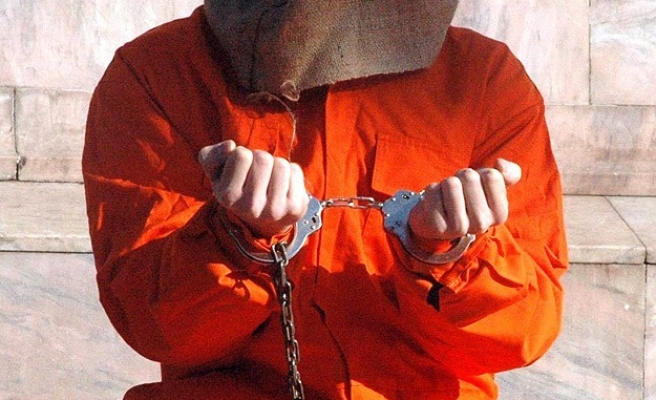 The CIA paid $80 million to a company run by two former Air Force psychologists without experience in "interrogation or counter-terrorism" who recommended waterboarding, slaps to the face and mock burial for prisoners the U.S. claimed of being terror suspects, according to a U.S. Senate report.

The two men are referred to in the report by the pseudonyms "Dunbar" and "Swigert" but have been identified by U.S. intelligence sources as James Mitchell and Bruce Jessen. The CIA outsourced more than 80 percent of its interrogation program to the company, Mitchell Jessen & Associates of Spokane, Washington, for its work from 2005 until the termination of the arrangement in 2009. The CIA also paid the company $1 million to protect it and its employees from legal liability.

The Senate report questioned the psychologists' qualifications and accused them of violating professional ethics as architects of a system that Dianne Feinstein, chair of the Senate Intelligence Committee, said amounted to the torture of some CIA detainees.

"Neither of the psychologists had any experience as an interrogator nor did either have specialized knowledge of al Qaeda, a background in counterterrorism, or any relevant cultural or linguistic experience," according to the report.

During an ordeal at a secret prison in early 2003, Abd al-Rahim al-Nashiri, captured in 2002 and suspected of the bombing of the USS Cole at Aden in 2000, was waterboarded repeatedly, forced to stand with his hands on his head for hours at a time and once, while blindfolded, was threatened with a buzzing power drill held near his head. Some CIA personnel involved in the episode concluded that Nashiri was not withholding significant information on any plots.

Even after that, a psychologist present urged that Nashiri be subjected to further harsh methods to induce the "desired level of helplessless," according to the report released on Tuesday. The report didn't say whether that psychologist was Mitchell or Jessen.

The CIA's chief of interrogations was so appalled when he received the proposed interrogation plan he emailed colleagues that the program was a "train wreck" waiting to happen, and that he no longer wanted to be associated with it, the report said.

"Why can't you leave me alone?" Mitchell, who has retired to Florida, asked a Reuters reporter when contacted by telephone on Tuesday. "I can't even confirm or deny if I was even involved. Talk to the CIA."

He was quoted as telling London's Guardian newspaper in April that he had nothing to apologize for, and that "I did the best that I could." His former colleague, Jessen, could not be reached for comment.

The two psychologists were allowed to evaluate their own work, to which they gave high marks, the report said.

"The contractors provided the official evaluation of whether the detainees' psychological state allowed for the continued use of the enhanced techniques even for some detainees they themselves were interrogating," Feinstein said.

In her preamble to the report, Feinstein wrote that her "personal conclusion" was that some of the CIA detainees had been tortured. On the Senate floor, she said the arrangement under which the psychologists appraised their own interrogation work was a "clear conflict of interest and a violation of professional guidelines."

Brought in by the CIA to help squeeze information from suspects after the Sept. 11, 2001 attacks, Mitchell and Jessen drew upon their experience in a Cold-War era program that taught U.S. airmen to cope with harsh interrogation if captured.

"I'm just a guy who got asked to do something for his country by people at the highest level of government, and I did the best that I could," Mitchell told the Guardian in the April interview.

"I don't care what Feinstein thinks about me," he said. "I'm retired ... I served my country and now I'm done. I did what I did for whoever I did it for, and now I'm done with that stuff."

In October 2004, 21 months after Nashiri was last subjected to enhanced interrogation techniques, an assessment by one of the psychologists and another CIA interrogator concluded that he had provided "essentially no actionable information," the report says.

It is a result that mirrors the report's overall conclusions that interrogations at secret CIA prisons were ineffective.

Over a period of years, Nashiri, who has been held at the U.S. military prison in Guantanamo Bay, Cuba, after spending time at a series of secret CIA jails, has accused U.S. personnel of drugging or poisoning him and has also gone on hunger strike, the report said.

FACTS ON THE REPORT

Meanwhile, Think Progress website points out the details in the the Senate Intelligence Committee’s report on the CIA’s extensive use of torture:

1. Torture did not lead the CIA to the courier who ultimately helped capture Osama bin Laden.

“The most accurate information on Abu Ahmad al-Kuwaiti — facilitator whose identification and tracking led to the identification of UBL’s compound and the operation that resulted in UBL’s death — “obtained from a CIA detainee was provided by a CIA detainee who had not yet been subjected to the CIA’s enhanced interrogation techniques; and CIA detainees who were subjected to the CIA’s enhanced interrogation techniques withheld and fabricated information about Abu Ahmad al-Kuwaiti.” [Page 379]

2. CIA personnel objected to torture techniques, but were “instructed” by the CIA headquarters to continue.

3. The two psychologists who helped the CIA create the torture techniques earned over $81 million.

“In 2006, the value of the CIA’s base contract with the company formed by the psychologists with all options exercised was in excess of $180 million; the contractors received $81 million prior to the contract’s termination in 2009. In 2007, the CIA provided a multi-year indemnification agreement to protect the company and its employees from legal liability arising out of the program. The CIA has since paid out more than $1 million pursuant to the agreement.” [Page 11]

4. Colin Powell was not briefed on CIA interrogation methods because he would “blow his stack”.

“At the direction of the White House, the secretaries of state and defense – both principals on the National Security Council – were not briefed on program specifics until September 2003. An internal CIA email from July 2003 noted that “… the WH [White House] is extremely concerned [Secretary] Powell would blow his stack if he were to be briefed on what’s been going on.” Deputy Secretary of State Armitage complained that he and Secretary Powell were “cut out” of the National Security Council coordination process.” [Page 7]

6. CIA leadership refused to punish an officer who killed a detainee during torture session.

“On two occasions in which the CIA inspector general identified wrongdoing, accountability recommendations were overruled by senior CIA leadership. In one instance, involving the death of a CIA detainee at COBALT, CIA Headquarters decided not to take disciplinary action against an officer involved because, at the time, CIA… In another instance related to a wrongful detention, no action was taken against a CIA officer because, “[t]he Director strongly believes that mistakes should be expected in a business filled with uncertainty,” and “the Director believes the scale tips decisively in favor of accepting mistakes that over connect the dots against those that under connect them.” In neither case was administrative action taken against CIA management personnel.” [Page 14]

“Of the 119 known detainees that were in CIA custody during the life of the program, at least 26 were wrongfully held. Detainees often remained in custody for months after the CIA determined they should not have been detained….Other KSM [Khalid Sheikh Mohammed] fabrications led the CIA to capture and detain suspected terrorists who were later found to be innocent.” [Page 485]

8. The CIA held an “intellectually challenged man” to use as leverage against his family.

“[A]n “intellectually challenged” man whose CIA detention was used solely as leverage to get a family member to provide information, two individuals who were intelligence sources for foreign liaison services and were former CIA sources, and two individuals whom the CIA assessed to be connected to al-Qa’ida based solely on information fabricated by a CIA detainee subjected to the CIA’s enhanced interrogation techniques.” [Page 12]

9. The CIA intentionally mislead the media to “shape public opinion.”

“The CIA’s Office of Public Affairs and senior CIA officials coordinated to share classified information on the CIA’s Detention and Interrogation Program to select members of the media to counter public criticism, shape public opinion, and avoid potential congressional action to restrict the CIA’s detention and interrogation authorities and budget.” [Page 8]

“CIA officers also threatened at least three detainees with harm to their families—to include threats to harm the children of a detainee, threats to sexually abuse the mother of a detainee, and a threat to “cut [a detainee's] mother’s throat.” [Page 4]

11. The CIA dismissed information that wasn’t obtained through torture, even though it proved to be true.

“KSM’s reporting during his first day in CIA custody included an accurate description of a Pakistani/British operative, which was dismissed as having been provided during the initial “‘throwaway’ stage” of information collection when the CIA believed detainees provided false or worthless information.’” [Page 82]

12. CIA torture techniques included mock burials and use of insects.

13. Some interrogators had previously admitted to sexual assault.

“The Committee reviewed CIA records related to several CIA officers and contractors involved in the CIA’s Detention and Interrogation Program, most of whom conducted interrogations. The Committee identified a number of personnel whose backgrounds include notable derogatory information calling into question their eligibility for employment, their access to classified information, and their participation in CIA interrogation activities. In nearly all cases, the derogatory information was known to the CIA prior to the assignment of the CIA officers to the Detention and Interrogation Program. This group of officers included individuals who, among other issues, had engaged in inappropriate detainee interrogations, had workplace anger management issues, and had reportedly admitted to sexual assault.” [Page 59]

“Among other abuses…had engaged in ‘Russian Roulette’ with a detainee.” [Page 424]

15. The CIA tortured its own informants by accident.

“In the spring of 2004, after two detainees were transferred to CIA custody, CIA interrogators proposed, and CIA Headquarters approved, using the CIA’s enhanced interrogation techniques on one of the two detainees because it might cause the detainee to provide information that could identify inconsistencies in the other detainee’s story. After both detainees had spent approximately 24 hours shackled in the standing sleep deprivation position, CIA Headquarters confirmed that the detainees were former CIA sources. The two detainees had tried to contact the CIA on multiple occasions prior to their detention to inform the CIA of their activities and provide intelligence. [Page 133]

16. The CIA tortured detainees in a dungeon.

“Conditions at CIA detention sites were poor, and were especially bleak early in the program. CIA detainees at the COBALT detention facility were kept in complete darkness and constantly shackled in isolated cells with loud noise or music and only a bucket to use for human waste. Lack of heat at the facility likely contributed to the death of a detainee. The chief of interrogations described COBALT as a “dungeon.” Another seniorCIA officer stated that COBALT was itself an enhanced interrogation technique.” [Page 4]

17. The CIA spent hundreds of millions of dollars on the torture program.

“CIA records indicate that the CIA’s Detention and Interrogation Program cost well over $300 million in non-personnel costs. This included funding for the CIA to construct and maintain detention facilities, including two facilities costing nearly $X million that were never used, in part due to host country political concerns. To encourage governments to clandestinely host CIA detention sites, or to increase support for existing sites, the CIA provided millions of dollars in cash payments to foreign government officials.”