Iowa Senator Joni Ernst says "there's a lot we can achieve if we work together" during the Republican response to President Obama's State of the Union address. 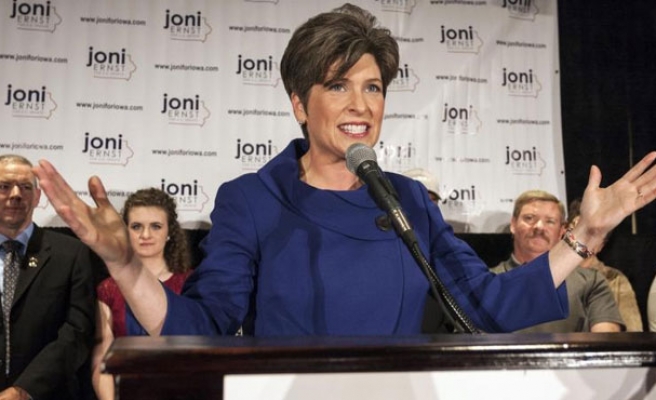 Republicans who now control the U.S. Congress will push back against President Barack Obama's agenda with legislation to create more jobs, Republican Senate newcomer Joni Ernst said in her State of the Union response on Tuesday.

Ernst, just two weeks into her Senate career, also appealed for cooperation from Obama, saying Republicans would soon send him a bill to approve the Keystone XL oil pipeline, which she called a "jobs bill."

"President Obama will soon have a decision to make: will he sign the bill or block good American jobs?" she said. "There's a lot we can achieve if we work together."

Ernst, the first woman elected to Congress from Iowa, is the latest fresh face that Republicans have put forward to respond to Obama. She was previously best known for an Iowa campaign commercial in which she touted her family farm experience castrating hogs.

"When I get to Washington, I'll know how to cut pork," she said in the ad last year.

Republican leaders on Capitol Hill view Ernst as a symbol of the Republican takeover of the Senate in November's elections, where she handily won a Senate seat vacated by longtime liberal Democrat Tom Harkin.

In her speech, she left out her campaign vow to make Washington "squeal" and emphasized her hard-working rural upbringing that included a fast-food job to save for college and her military service.

She vowed that Republicans would keep fighting to replace Obama's healthcare reform law, known as Obamacare, and "correct executive overreach," a reference to Obama's executive actions on immigration.

She also called for legislation to speed free trade deals with European and Asia-Pacific countries, and called for reforming an outdated tax code.

With a well-rehearsed, restrained but sometimes stiff delivery, she avoided some of the gaffes that have plagued some fellow Republicans who have responded to Obama's addresses.

Fellow Senator Marco Rubio of Florida still gets jabs from late night comedians over his frequent use of a water bottle in 2013, while Louisiana Governor Bobby Jindal's awkward tone in responding to Obama's first address in 2009 drew poor reviews from members of his own party.

New Republican Representative Carlos Curbelo of Florida delivered a Spanish version of the Republican response, but it included something absent from Ernst's version, a call for immigration reform. The son of Cuban immigrants said Congress should "work through the proper channels to create permanent solutions to our immigration system, to secure our borders, modernize legal immigration, modernize and strengthen our economy."