Kerry made clear the United States does not want Russia to intervene in Ukraine's affairs after its ally Viktor Yanukovich was toppled as president in Kiev. 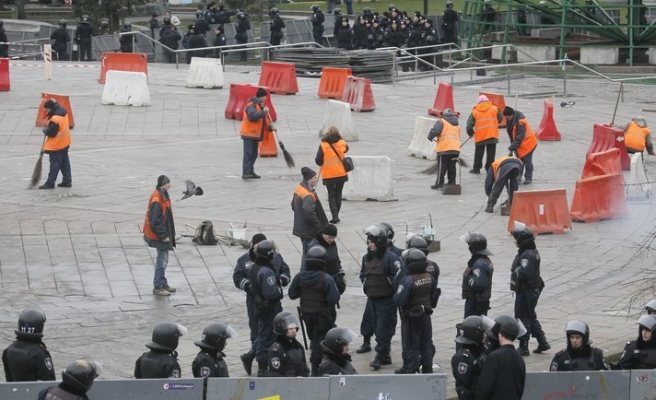 The United States said on Wednesday that Russia must respect Ukraine's territorial integrity as Moscow put combat troops on high alert for war games near its Western neighbor.

"We urge outside actors in the region to respect Ukraine's sovereignty and territorial integrity, to end provocative rhetoric and actions, to support democratically established transitional governing structures and to use their influence in support of unity, peace and an inclusive path forward," Earnest said.

In a television interview, U.S. Secretary of State John Kerry also made clear the United States does not want Russia to intervene in Ukraine's affairs after its ally Viktor Yanukovich was toppled as president in Kiev.

"We're hoping that Russia will not see this as sort of a continuation of the Cold War," Kerry told MSNBC's "Andrea Mitchell Reports" show.

"We do not believe this should be an East-West, Russia-United States (issue). This is not 'Rocky IV,'" he said in a reference to a 1985 film pitting U.S. boxer Rocky Balboa played by Sylvester Stallone against a Soviet portrayed by Dolph Lundgren.

Russian President Vladimir Putin put 150,000 combat troops on high alert for war games near Ukraine on Wednesday, the Kremlin's boldest gesture yet after days of sabre rattling since Yanukovich's ouster.

The statement read by Earnest did not mention Russia by name but said Washington wanted to "remind all governments of their political commitments to transparency about military activities under ... international obligations designed to ensure peace and security in the Euro-Atlantic region."

Kerry said Russia should respect the Ukrainian people's desire for change and that they should not have to choose between relations with Europe and the United States on one hand and Russia on the other.

"Russia needs to be very careful in the judgments that it makes going forward here," he said.

"We are not looking for confrontation but we are making it clear that every country should respect the territorial integrity ... of Ukraine. Russia has said it will do that and we think it's important that Russia keeps its word."

Aid to Georgia to boost visa-free travel to EU

The United States also pledged assistance to Georgia to help the former Soviet republic with visa-free travel to the European Union, a move that will spur its efforts to boost ties with the West.

U.S. Secretary of State John Kerry didn't elaborate on the plan, which comes as Washington increases its support for Georgia and Moldova, which are seeking more integration with Western Europe and rejecting pressure from former master Russia.

"Today I am announcing additional assistance by the United States to help support Georgia's Euro-Atlantic vision, specifically to help Georgia achieve visa-free travel with the EU and to mitigate the hardships by borderization along the occupied territories," Kerry said at the start of meetings with Georgian Prime Minister Irakly Garibashvili.

Kerry was referring to occupied territories like Georgia's breakaway region of South Ossetia, the center of a brief 2008 war between Russia and Georgia.

Garibashvili told Reuters in an interview on Tuesday that Russian forces had resumed building a barbed wire fence on the border of South Ossetia following the recent conclusion of the Winter Olympics in Sochi.

Kerry lauded Georgia's economic reforms and urged the government to quickly implement plans to boost trade with the United States and with Europe.

"Strict adherence to rule of law and steadfast commitment to the process will encourage the confidence of investors and will serve as a catalyst for integration with Europe," Kerry said.

Referring to tensions with Russia, Kerry urged Georgia to "look forward and leave the past in the past."

Garibashvili's visit to Washington comes amid political turmoil in another former soviet state, Ukraine, which rejected deeper ties with the EU when president Viktor Yanukovich abandoned a proposed trade pact with the EU in November, sparking violent street clashes.

Like Ukraine, Georgia has been caught in the middle of a tug-of-war between integrating with Europe and the West, or staying under Moscow's influence.

Kerry rejected the idea that the situation in Ukraine was a "zero-sum game" between Russia and the West.

However, there were fears on Wednesday that tensions with Russia could escalate after Moscow said about 150,000 Russian troops would take part in exercises in the Western military district that borders Ukraine.