The burials, found underneath the cremated remains of an Ice Age toddler, date to about 11,500 years ago 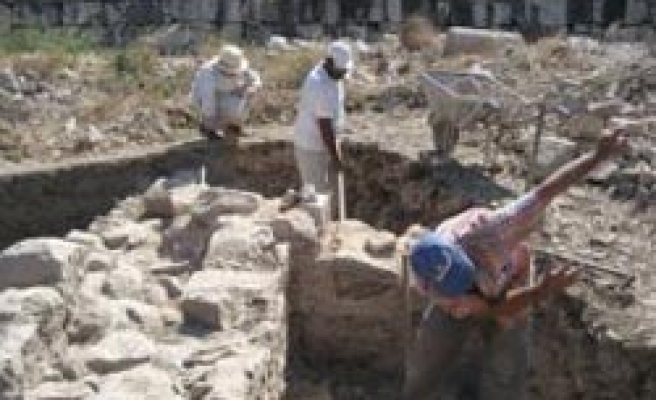 Archaeologists working in Alaska's remote interior have discovered the burial site of an Ice Age infant and a late-term fetus believed to be the youngest remains found in the Americas dating from that period.

The burials, found underneath the cremated remains of an Ice Age toddler, date to about 11,500 years ago and provide new insights into mortuary practices of the people who lived in the area of the Upward Sun River site at the time.

The largely complete skeletons were found in a circular pit with associated "grave goods" that included four antler rods and two stone projectile points, all decorated with red ochre, according to research carried out last year by a team led by University of Alaska anthropologist Ben Potter.

In a paper published on Monday in the Proceedings of the National Academy of Sciences, the team said skeletal and dental analyses indicate one of the skeletons was of an infant that died shortly after birth, while the other was of a late-term fetus.

The site represents the youngest-aged late Pleistocene individuals known in the Americas, it said, as well as the continent's only known prenatal burial dating from the period.

The pair, both tentatively believed to have been female, were found buried about 16 inches (40 cm) beneath the cremated remains of a 3-year-old child that was previously excavated by the team during work at the site in 2010.

"Two interred infants with associated grave goods and a third cremated child represent the earliest known human remains from the North American subarctic, and they provide evidence for novel mortuary behaviors at the end of the last Ice Age," the authors wrote.

The team, which included Joel Irish of Liverpool John Moores University, said the site shares characteristics with other burials from the same periods, including interment in pits, red ochre, and grave goods consisting of functional tools, as opposed to ornaments or trinkets.

The archaeologists believe the stone projectile points were once attached to the antler rods to make tools or weapons, and could reflect the importance of hunting implements in the burial ceremony. But they said they also noted the predominance of fish and small game remains at the site.