Storm Earl picks up speed, bears down on Atlantic Canada

Tropical storm Earl picked up speed as it bore down on Atlantic Canada packed with strong winds and rain. 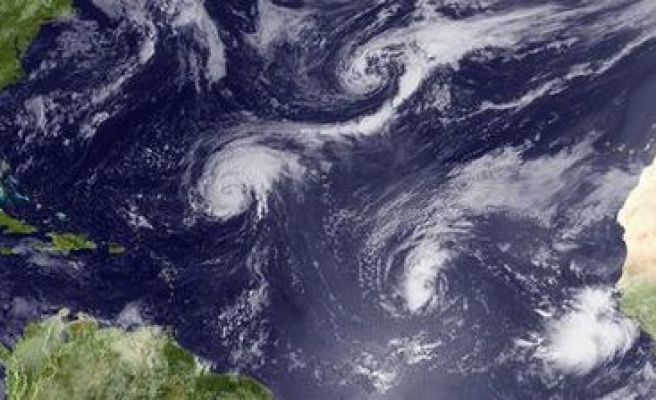 Tropical storm Earl, a shadow of the massive hurricane that frightened the U.S. East Coast this week, picked up speed on Saturday as it bore down on Atlantic Canada packed with strong winds and rain.

The core of the storm was expected to hit the Nova Scotia coast by late morning or early afternoon, the U.S. National Hurricane Center said.

Canada warned residents in parts of the Atlantic provinces to be on alert for tropical storm conditions. In Nova Scotia, residents stocked up on emergency supplies.

Earl delivered heavy rain and gusty winds to parts of New England en route to Canada, but caused far less damage than feared on its path up the U.S. coast from North Carolina.

Maximum sustained winds were down to 70 mph (110 kph) as Earl passed east of Massachusetts' Nantucket Island and moved northeast at 30 mph (48 kph), the hurricane center said.

It warned that Earl -- though no longer packing anywhere near the power of its peak ranking as a fearsome Category 4 storm on the five-step Saffir-Simpson scale -- was still a large storm and could cause sea surges and localized flooding.

Imperial Oil Ltd shut down its Dartmouth, Nova Scotia, refinery as a precaution.

Exxon Mobil said it had pulled nonessential staff from its Sable field in offshore Nova Scotia.

The fading storm raised hopes that the U.S. Northeast will suffer only limited losses during the 3-day Labor Day holiday weekend, which airlines and other businesses bank on for a final flood of summer tourist dollars.

Many residents and business owners on Massachusetts' Cape Cod and the islands of Martha's Vineyard and Nantucket boarded up windows on Thursday preparing for the worst.

The Coast Guard closed ports in southeastern Massachusetts and Rhode Island. Dozens of flights were canceled to the area, National Guard troops were standing by, and extra utility crews were in place to respond to any power outages.

High surf pounded Nantucket and Martha's Vineyard, with waves as high as 10 to 12 feet, local media reported. Some streets in downtown Nantucket were flooded as the island was pounded by heavy rain.

Storm-related outages from North Carolina to Connecticut knocked out power to about 3,300 customers, the U.S. Energy Department said -- a small number that showed the mild impact of what had once shaped up to be a monster storm.

No storm has threatened such a broad swath of the U.S. shoreline since Hurricane Bob in 1991. But as Earl moved to Canada, U.S. East Coast residents breathed a sigh of relief.

"For the most part, it appears we have dodged a bullet," North Carolina Governor Bev Perdue said.

Minimal damage was reported other than beach erosion from fierce waves on North Carolina's Outer Banks low-lying barrier islands. Flooding up to 3 feet (1 meter) was reported in at least one island village, along with scattered power outages.

Waves surged over the road linking the islands, where 100,000 people were ordered to evacuate as Earl approached. But as the storm moved away, beaches and businesses reopened.

The Boston Red Sox baseball team postponed its game due to expected poor weather, but U.S. Open tennis in Flushing Meadows, New York, was hit by no more than a few rain-drops.

Behind Earl, Tropical Storm Fiona weakened to a "remnant low" on Friday as it moved north over the Atlantic toward Bermuda, the hurricane center said. Fiona had top sustained winds of 30 mph (45 kph) and was expected to weaken further as it passed near the British territory on Saturday.