Moving slowly inland, the powerful rainmaker was on course to hit Mississippi on Monday, Alabama, Tennessee and Kentucky on Wednesday and Thursday, the U.S. National Hurricane center said. 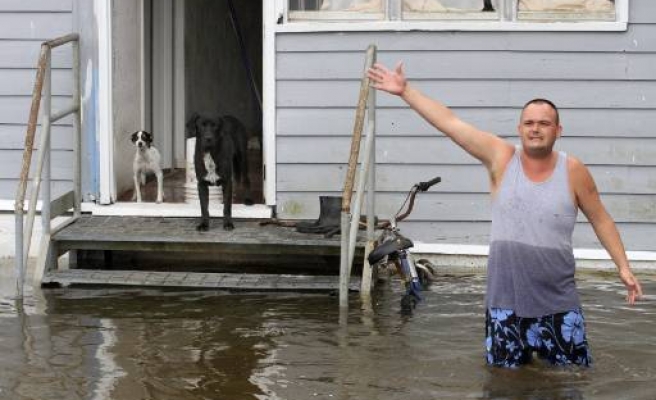 After testing New Orleans' flood defenses over the weekend, Tropical Storm Lee moved northeast on Monday after weakening to a tropical depression, and threatened to bring heavy rains and flooding to a large section of the U.S. Southeast.

Moving slowly inland, the powerful rainmaker was on course to hit Mississippi on Monday and Alabama, Tennessee and Kentucky on Wednesday and Thursday, the U.S. National Hurricane center said.

Even as a tropical depression, the remnants of Lee have the potential to dump 10-15 inches (25-38 cm) of rain across the Gulf region, forecasters said. Heavy rains are expected to spread into the Tennessee Valley and Southern Appalachians through Tuesday with rainfall of 4-8 inches (10-20 cm).

"These rains are expected to cause extensive flooding and flash flooding," the hurricane center said. It added that tornadoes were possible on Monday in sections of Louisiana, Mississippi, Alabama and the Florida Panhandle and southwest Georgia.

The rains could bring to the Tennessee Valley and Appalachian Mountains the same kind of flash flooding seen recently in Vermont after Hurricane Irene.

In Texas, winds from the storm whipped up wildfires that have burned more than 3.5 million acres (1.4 million hectares) of the parched state this season, with 1,000 homes threatened in Bastrop County, just east of Austin.

The National Hurricane Center said the remnants of Lee were 55 miles (90 km) west-southwest of McComb, Mississippi, with maximum sustained winds of 35 mph (55 kph) around 11 p.m. EDT (0300 GMT on Monday). The storm was moving east-northeast at 7 mph (11 kph).

The storm has temporarily shut over 60 percent of offshore oil production.

In New Orleans, flood defenses appeared to pass one of their biggest tests since Hurricane Katrina devastated the city in 2005 despite up to 13 inches (33 cm) of rainfall since Lee developed late last week.

Half the city lies below sea level and is protected by a system of levees and flood gates.

Some street flooding was reported, but the city's massive pumping system kept ahead of the volume and diverted the waters into Lake Pontchartrain.

New Orleans' levees saw less stress because Lee's winds were too weak to drive a massive storm surge into the city, as was the case during Katrina, which flooded 80 percent of the city, killed 1,500 people and caused more than $80 billion in damage to the popular tourist destination.

New Orleans Mayor Mitch Landrieu warned residents to stay alert for flash floods and high winds expected before Lee departs, saying, "Let's not be lulled to sleep by the breaks that we've had."

There were isolated reports of flooding in roads and homes. No injuries or deaths were reported in Louisiana.

Wet conditions associated with the storm appeared to be a factor in an early morning car wreck in Mobile, Alabama, that killed one man and left several injured.

As of Sunday afternoon, 6,149 customers were without power in Louisiana and 609 in Mississippi, utility Entergy Corp reported.

More than 60 percent of U.S. offshore oil production, all based in the Gulf of Mexico, and over 44 percent of offshore gas production were shut as of Saturday, The U.S. government said. Most of that output should quickly return once the storm passes.

Low-lying refineries in Louisiana that collectively account for 12 percent of U.S. refining capacity were watching the storm closely but reported no disruptions.

In the open Atlantic, Hurricane Katia, which strengthened rapidly to a Category 2 storm on Sunday, had slightly weakened early on Monday and was moving steadily in a northwestward direction about 400 miles (644 km) north of the northern Leeward Islands, the hurricane center said.

Katia had top sustained winds of 100 mph (161 kph) and was expected to become a "major hurricane" by Tuesday, the hurricane center said. It added that large swells from Katia were expected to affect most of the U.S. East Coast, Bermuda, the Greater Antilles and the Bahamas in the next few days.