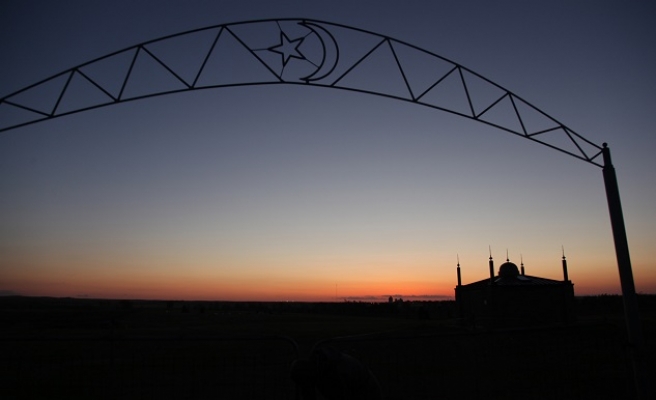 Sitting alone on the western North Dakota prairie is a monument to early pioneers. A monument unknown to people who live just six miles away in Stanley. Unknown to the decedents of the people who worshiped there, and descendants of people buried there.

This particular mosque is the first mosque ever built in America.

"During the homestead period," Father William Sherman, who wrote the book on the first Muslim settlers, explains, "people were coming out here because of free land."

The promise of land brought out settlers from what is now modern day Lebanon. Back then, the region was in Syria and was incorporated into the Ottoman Empire.

300 Muslim families came to the North Dakota. One of those immigrants was Ali Omar, who was about to be drafted into the Ottoman Army but he didn't want to fight for the Ottoman Empire, so he came to the United States. He came to North Dakota in 1909. But it wasn't until 20 years later that the first mosque in America was built. There was not enough of a community at that point that it was worth building a mosque. The mosque was built in 1929, a place where first Muslim settlers could practice their beliefs.

Without permanent religious leaders, the mosque fell out of use in the mid 1930s, the Great Depression and the Dust Bowl taking a toll on the Muslim population. Thus, many people went on to the west coast, where there was some jobs.

One could think that when the original mosque shut down and the worshippers that it would close the doors on this history in North Dakota. But more than 80 years later, their legacy lives on across the state. Descendants of the Muslim settlers have dotted the map. In Williston, Bismarck, the Red River Valley. A fact that shows how the immigrants were able to live in harmony with other early North Dakotans.

Despite the long history of Muslims in North Dakota anti-Muslim sentiment seems to be growing. Lutheran Social Services has been under fire for helping refugees resettle in Fargo. And a Somali-owned restaurant was fire-bombed in Grand Forks, after Nazi-themed graffiti was sprayed on the building.

People who know about the early Muslims say a lesson can be learned today. They hope the Muslim history can help create harmony in the present, and the future in North Dakota. Muslims from around the country make trips to visit the first American mosque. The mosque and cemetery are managed by the children and grandchildren of the original settlers. They are discussing the possibility of turning the care of the site over to the North Dakota State Historical Society.