Supporters of Morsi protest in front of White House

A group of Egyptian-Americans staged Monday a pro-Morsi protest in front of the White House in Washington. 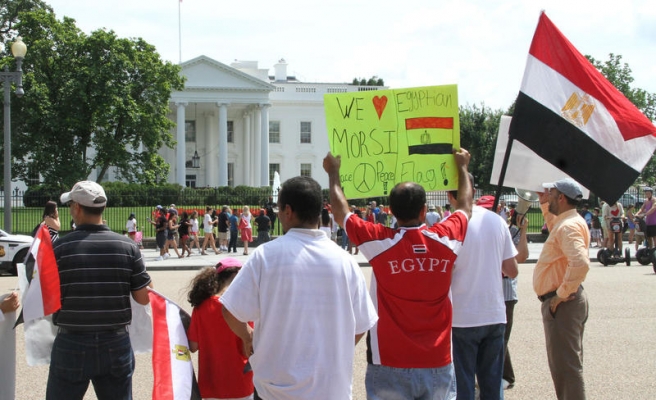 A group of Egyptian-Americans staged Monday a pro-Morsi protest in front of the White House in Washington.

Egyptian-Americans gathered in front of the White House, chanting pro-Morsi slogans and unfurling banners, urging US President Barrack Obama to name the incidents in Egypt as "a military coup".

Head of Democracy and Human Rights for Egyptian-Americans, Akram Elzend, called Obama and other world leaders to adopt "a pro-democracy stance".

"We have returned to the point zero in democracy after the coup d'etat, but we won't go back further. The army removed the first democratically elected President Mohammad Morsi from government, contrary to the demands of the Egyptian people," Alzand said, adding millions went on streets to stage pro-Morsi protests.

A former finance minister has been appointed as a care-taker prime minister and Egypt's leading opposition leader Mohamed ElBaradei, a former head of the UN's nuclear watchdog agency, was named as vice-president. Hundreds of thousands of Morsi loyalists have been demonstrating since then, demanding Morsi's reinstatement.