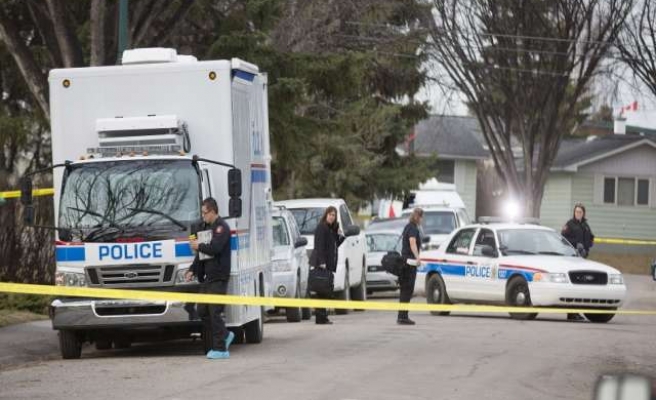 The shooting in the eastern city of Moncton was one of the worst of its kind in Canada, where gun laws are stricter than in the United States and deadly attacks on police are rare.

Police arrested Justin Bourque, 24, shortly after midnight local time in Moncton, a city of about 70,000 in the East Coast province of New Brunswick.

The arrest was witnessed by Moncton resident Michelle Thibodeau, CBC News reported. She told the broadcaster that after several police officers moved into her backyard, Bourque emerged from a patch of trees with his hands up and said, "I'm done."

Royal Canadian Mounted Police Superintendent Marlene Snowman told a media briefing that Bourque was unarmed at the time, although there were weapons found in the vicinity.

She said charges were being prepared and the suspect was expected to appear in court later on Friday in Moncton.

"This is the outcome that we wanted. We wanted to have the arrest as quick as possible without any further injury or death to anyone. And that is what occurred and we are extremely pleased and proud of all the officers and the public that assisted us," she said.

Their deaths have spurred an outpouring of grief across Canada. The last mass killing of Canadian police took place in Mayerthorpe in the western province of Alberta in 2005, when a gunman killed four officers before shooting himself.

"The only way we'll get through this is by doing it together," commander of the RCMP in New Brunswick, Roger Brown, said, his voice choked with emotion. "Please keep your thoughts and your prayers with us, with our families as we grieve and heal together."

Hundreds of police, some in armored vehicles and some with dogs, had cordoned off a large area of the city on Thursday and warned residents to stay in their homes and lock their doors.

Bourque was named as a suspect late on Wednesday after the shootings. Police said he had no previous criminal record.

Police said they were alerted on Wednesday afternoon by a member of the public who spotted an armed man in camouflage clothing walking down a residential street. When police arrived, the man moved into a nearby wooded area and opened fire.

Canadian media published a photograph of a man wearing camouflage clothing and a black headband and carrying a rifle. Reuters could not immediately verify the picture as authentic.

A Facebook page purporting to belong to Bourque was filled with posts critical of the police and those who back gun control.

Americans don't understand why the RCMP did not kill Bourque at the time he was being arrested. After posting a comment on the ABC television network that the police did not fire a single shot or beat Bourque during the arrest process, there were more than a dozen reply comments that basically condemned -- condemned -- the RCMP for capturing him alive.