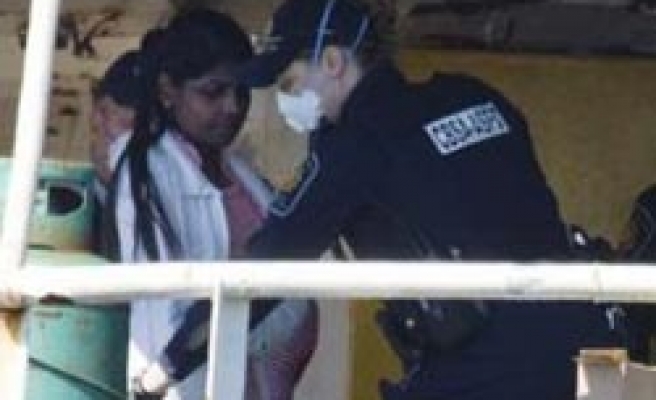 Canadian authorities unloaded a cramped cargo ship on Friday of nearly 500 Tamil asylum seekers from Sri Lanka whose arrival has sparked a national debate over the country's immigration and refugee laws.

MV Sun Sea sailed under escort into a Canadian Navy base near Victoria, British Columbia, on Vancouver Island, and docked next to a makeshift camp set up to process the men, women and children on board.

Officials said the ship was in “good condition”, but they would not describe the accommodations of the estimated 490 people who may have spent more than two months housed in the cargo hold of the 59-metre-long (194-foot-long) vessel.

Opposition parties and some refugee experts warned the government not to jump to conclusions about who the migrants are, and said each person's case should be judged individually.

"Obviously, in the aftermath of the war in Sri Lanka, a great deal hardship was experienced and there are a lot of people who want to get out of Sri Lanka," Bob Rae, the Liberal Party's foreign affairs critic told CBC.

The government is looking at toughening immigration laws so that boat people are treated differently from other refugee-seekers, the Globe and Mail newspaper reported.

"We can improve the laws to reduce the likelihood of something occurring, and that is essentially what we are doing," Toews said.

Public Safety Minister Vic Toews warned that Canada will be taking a tough line with the Thai-owned ship, which he said was believed to be “carrying Tamil Tigers” and may be part of a larger, international human smuggling operation.

The people on the Sun Sea are believed to be Tamils fleeing Sri Lanka, but Canada “fears” some are members of the Liberation Tigers of Tamil Eelam, which fought for independence against Sri Lanka last year.

The military wing of the Tamil independence movement is considered a terrorist organization by Ottawa, which would make it illegal for members or supporters of the Tamil Tigers to immigrate to Canada.

The Sun Sea is the second ship carrying Tamil refugees to arrive in Canada in less than a year, and officials fear more are on the way. A cargo ship carrying 76 Tamil refugee claimants docked on the West Coast last October, but arrivals of boat people are a relatively rare occurrence.

Canada received 34,000 refugee applications last year, with most made by people after arriving by air or by driving in from the United States.

An estimated 250,000 people of Tamil decent live in Canada, primarily in the Toronto area. It is said to be the largest Tamil population outside Sri Lanka and India.

The arguments in Canada over immigration have never reached the fevered pitch heard in the United States, but the Sun Sea incident has set off a front-page debate in the media over whether its rules are too lax.

Canadian law now prevents its warships from boarding vessels on the high seas that are thought to be smuggling people to Canada, although they do conduct boardings as part of anti-piracy efforts off Somalia.

I am disgusted with my government. What a joke this country is. Harper has just lost my vote. I will be spoiling my ballot next election. These "refugees" are parasites, and my country is once again being whored on the int'l market. What a laughing stock of the world Canada is. Get ready for it Canadian taxpayers: The Great Armada is coming with thousands more of life-sucking welfare cases. It's so nice to be seen as "caring" suckers! Thanks Ottawa.