A conservative "Tea Party" favorite knocked off the establishment choice in Delaware's Republican Senate primary election, dealing a blow to the party's chances to recapture the U.S. Senate in November. 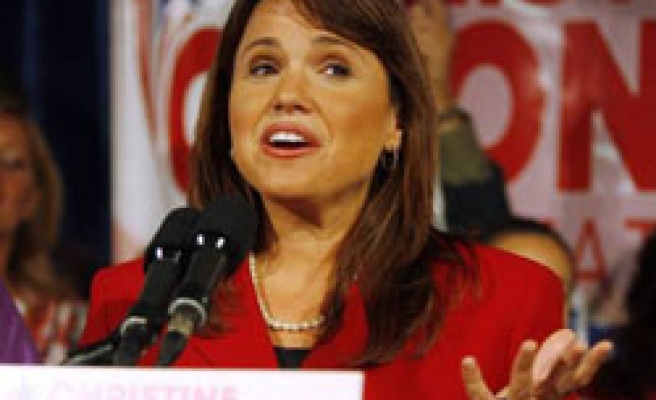 A conservative "Tea Party" favorite knocked off the establishment choice in Delaware's Republican Senate primary election on Tuesday, dealing a blow to the party's chances to recapture the U.S. Senate in November.

Upstart Republican candidate Christine O'Donnell scored the biggest in a string of Tea Party upsets this year over nine-term Representative Michael Castle, a popular former governor and one of the last Republican moderates in Congress.

The loss by Castle, who had been expected to cruise to victory in Delaware's Nov. 2 election, gave Democrats new hope in the state and bolstered their chances to retain control of the Senate.

A Tea Party favorite was a close second as votes were being counted in New Hampshire's Republican primary and another Tea Party-backed candidate easily won New York's Republican gubernatorial race.

National and state Republicans had rushed in recent weeks to help Castle, worried O'Donnell could not win the November race for the Democratic Senate seat long held by Vice President Joe Biden.

"The people of Delaware have spoken. No more politics as usual," O'Donnell told supporters at a victory rally. "The cause is restoring America."

Castle is the eighth Senate candidate supported by the national Republican campaign committee to lose a primary this year and the result was perhaps the biggest display yet of anti-Washington anger.

The string of victories by Tea Party candidates was fueled by broad voter dissatisfaction with President Barack Obama and government in Washington, and left Republicans in turmoil.

"Delaware Republicans chose an ultra-rightwing extremist who is out of step with Delaware values," said Democratic Senator Robert Menendez, who leads the party's campaign committee.

The Republican Senate campaign committee issued a terse one-sentence statement of congratulations on O'Donnell's win. O'Donnell shrugged off the likelihood the committee would not spend any money on her.

"They don't have a winning track record this season," she told CNN.

The contest in Delaware highlighted the final day of primaries before November, with voters in seven states choosing nominees for the Senate, House of Representatives and governor's races.

Paladino, who pledges to spend up to $10 million of his own money, will be a huge underdog in the November race against Democrat Andrew Cuomo.

U.S. Representative Charles Rangel of New York, a veteran of 40 years in the House, survived a Democratic primary challenge despite an ethics scandal. He awaits trial by his House colleagues on 13 alleged violations of House rules.

Republicans are threatening to turn voter worries about the economy and Obama's leadership into big gains in November that could give them control of the House and perhaps even the Senate, once considered a longshot.

Republicans must pick up 10 Democratic seats to reclaim the Senate, and Delaware was once considered to be safely in the Republican column with Castle as the candidate. Without Castle, Democrat Chris Coons, a county executive, becomes at least a slight favorite to win the Senate seat in November.

The Delaware primary fight had gained new urgency after last month's upset of Republican Senator Lisa Murkowski of Alaska hammered home the point that no incumbent was safe in a year when seven had lost congressional primaries.

Democrats hope the Republicans' shift to the right and the nomination of outsider candidates in Nevada, Kentucky, Colorado and elsewhere will help them in November by alienating moderates and energizing Democrats in those crucial races. Polls show tight Senate races in all those states.