Trayvon Martin's parents were due to lead demonstrations in New York and Miami on Saturday, as protesters across the country rallied to express anger over the acquittal of the man who shot and killed the unarmed black teenager. 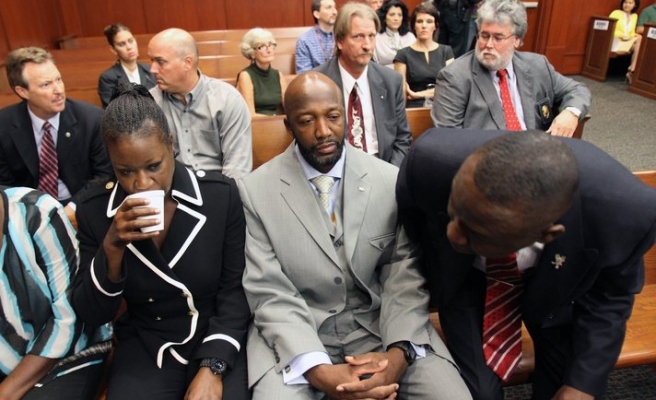 Trayvon Martin's parents were due to lead demonstrations in New York and Miami on Saturday, as protesters across the country rallied to express anger over the acquittal of the man who shot and killed the unarmed black teenager.

The protests, outside federal court buildings and police headquarters, were set to take place exactly one week after a Seminole County jury in central Florida acquitted George Zimmerman of second-degree murder and manslaughter for shooting the 17-year-old Martin through the heart.

They were organized by the Reverend Al Sharpton, the veteran civil rights activist, days before President Barack Obama spoke extensively about the Martin case and highlighted its racial undertones in remarks at the White House on Friday.

Sharpton has said protests were planned for more than 100 cities nationwide and organizers have voiced hopes they will be peaceful, with no further outbreaks of the violence that led to arrests in Los Angeles and the San Francisco Bay area earlier this week.

Obama also cautioned against violence, as he urged all Americans to try to understand the Martin case from the perspective of African-Americans.

"There is a history of racial disparities in the application of our criminal laws," the president said on Friday.

"A lot of African-American boys are painted with a broad brush," he said. "If a white male teen was involved in the same kind of scenario ... both the outcome and the aftermath might have been different."

Zimmerman remained free for more than six weeks after killing Martin because police in Sanford, Florida, accepted the claim that he acted in self-defense. That ignited protests and cries of injustice across the United States as the case threw a spotlight on issues including race, profiling and vigilantism.

Sharpton, who will lead one rally Saturday along with Martin's mother, Sybrina Fulton, outside police headquarters in New York, has said he hopes continued public pressure will force the Justice Department to bring a civil rights case against Zimmerman.

A planned demonstration in Miami, near the home where the 17-year-old Martin lived, was due to be led by his father.

Public comments from one of the six jurors, citing Florida's Stand Your Ground law as a factor in reaching her conclusion that Zimmerman acted in self-defense, has stepped up pressure on the state's Republican-dominated legislature to repeal or change the law.

According to the instructions given to the jury, Zimmerman had "no duty to retreat and right to stand his ground and meet force with force, including deadly force, if he reasonably believed it was necessary to do so to prevent death or great bodily harm to himself."

Though the Stand Your Ground law was not specifically cited as part of the defense mounted by Zimmerman's lawyers, the jury instructions paving the way for his acquittal came directly from the 2005 statute.

Florida Governor Rick Scott, who met with sit-in demonstrators outside his office in the Florida capital Tallahassee on Thursday, said he supports the Stand Your Ground law and has no intention of convening a special legislative session to change it.

But Obama suggested that was the wrong course of action.

"I think it would be useful for us to examine some state and local laws to see if they are designed in such a way that they may encourage the kinds of altercations and confrontations and tragedies that we saw in the Florida case," he said.