Winds were expected to weaken gradually in the next couple of days and up to 20 inches (51 cm) of rain was expected to fall on southeast Louisiana, the Miami-based center said. 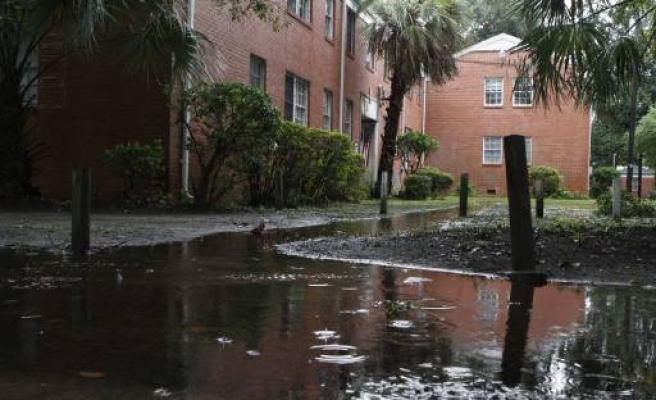 Tropical Storm Lee crawled onto southern Louisiana's coast on Sunday as New Orleans prepared for one of the biggest tests of its flood defenses since Hurricane Katrina devastated the city in 2005.

Winds were expected to weaken gradually in the next couple of days and up to 20 inches (51 cm) of rain was expected to fall on southeast Louisiana, the Miami-based center said.

In New Orleans, the storm recalled Hurricane Katrina, which flooded 80 percent of the city, killed 1,500 people and caused more than $80 billion in damage to the popular tourist destination.

Half the city lies below sea level and is protected by a system of levees and flood gates.

The levees can process about 1 inch (2.5 cm) of rainfall per hour and the storm's slow-moving nature remained a worry, officials said. There were isolated reports of flooding in roads and homes. No injuries or fatalities were reported.

New Orleans officials were cautiously optimistic that the pump system would stay ahead of the rainfall, as residents awoke on Sunday to the arrival of a heavy band of rain.

"There's not a whole lot of flooding anywhere, so things are OK," said Jerry Sneed, deputy mayor of public safety. "We're ready for the next round."

On Saturday, Mayor Mitch Landrieu said stormy conditions could continue for the next 36 hours. "Don't go to sleep on this storm," he told residents.

New Orleans is under a flash flood watch through Monday night, the National Weather Service said. Potential damage from wind gusts will also be a concern, it said.

In Mississippi, local governments were taking precautions as forecasters predicted tides could be 2 feet to 4 feet (0.6 to 1.2 metres) above normal.

About 11,500 houses were without electrical power due to the storm late on Saturday, down from about 38,000 earlier, according to utility Entergy Corp.

More than 60 percent of U.S. offshore oil production, all based in the Gulf of Mexico, and nearly 55 percent of offshore gas production were shut as of Friday, according to the U.S. government. Most of that output should quickly return once the storm passes.

Shell and Anadarko Petroleum Corp started to return workers to offshore platforms in the western Gulf of Mexico on Saturday.

Low-lying refineries in Louisiana that collectively account for 12 percent of U.S. refining capacity were watching the storm closely, but reported no disruptions.

In the open Atlantic on Sunday, Hurricane Katia -- upgraded once again from a tropical storm -- was churning northwestward on a track far from any immediate encounter with land.

"It would be a good idea for people on the (U.S.) East Coast just to keep watching this storm but really, because there is so much uncertainty in this forecast, it's really too early to say what kind of impacts we might see," said Robbie Berg, a hurricane specialist at the National Hurricane Center.