The Trumps made a brief visit to the Capitol rotunda, where Bush's flag-draped coffin was resting as part of tributes to honor the 41st US president and remember his extraordinary life. 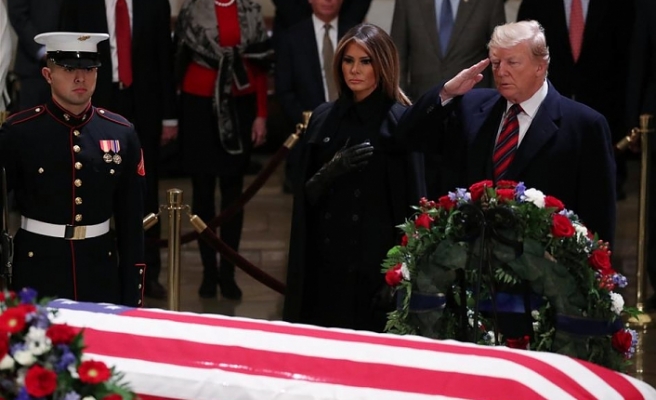 President Donald Trump and First Lady Melania paid their respects Monday to late president George H.W. Bush, whose remains lay in state in the US Capitol.

Bush died peacefully Friday at age 94, at his home in Houston, a passing that led Americans to reflect on his life of duty and service to country as a leader of the so-called "Greatest Generation."

Only the second president to see his son follow him to the Oval Office, the Republican stalwart is being honored with four days of commemorations and services in Washington and in Texas, where he will be buried Thursday.

Trump is scheduled to attend a state funeral Wednesday at Washington National Cathedral -- the first presidential funeral since Gerald Ford died in 2006.

But late Monday, after Bush relatives and dignitaries had gone, the president was driven from the White House up to Capitol Hill.

With the first lady at his side, Trump saluted, and they stood at Bush's casket for about a minute. They exited the rotunda with little fanfare.

Bush never warmed to Trump, and he had let it be known that he did not vote for him in 2016. Trump himself has criticized the elder Bush on the campaign trail.

But on Monday, Trump wrote members of Congress to hail Bush as a man who "led a life that exemplified what is truly great about America."

"President Bush worked selflessly throughout his long life to bring about a world of justice and lasting peace," he wrote.

The White House also extended an invitation to Bush's family to stay at Blair House -- the President's guest house-- while they are in Washington for events surrounding to his funeral.

Military pallbearers carried the flag-draped casket into the rotunda as a fiery sunset bathed Washington in a glow.

The somber ceremony was attended by his son George W. Bush -- the nation's 43rd president -- and other relatives, dignitaries and more than 100 members of the House and Senate.

Senate Majority Leader Mitch McConnell lauded Bush -- who occupied the White House from 1989 to 1993 -- as a patriot who steered the country as straight as he had piloted his World War II airplane.

"He kept us flying high and challenged us to fly higher still. And he did it with modesty and kindness that would have been surprising in someone one tenth as tough and accomplished as he was," he said.