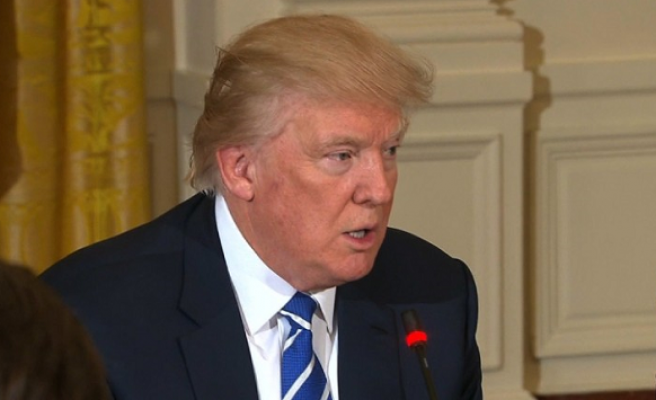 "Extreme vetting" is not the answer to halt mass shootings in the U.S., President Donald Trump said Tuesday.

The American president has insisted on stringent screening for those who are seeking to enter the U.S. following successive bloody attacks perpetrated by Muslims -- whether those attacks occurred in the U.S. or abroad.

But for those seeking to buy firearms, authorities should not apply any more critical measures than they do under current law, despite striking mass shootings that continue to pile up in the U.S. "Not going to help," Trump said at a news conference in South Korea.

Trump, who has been quick to label attacks by Muslims as "acts of terror" said the U.S. "could let a little time go by" before taking up the issue of gun control following the worst mass murder in the state of Texas on Sunday.

"If you did what you're suggesting, there would have been no difference three days ago," Trump said, suggesting that tighter gun control regulations might have prevented a U.S. citizen from thwarting Devin Patrick Kelley's escape after he killed 26 worshippers at a church in Sutherland Springs, just outside of San Antonio.

A local resident who lived across the street from the church shot Kelley with a rifle as he tried to leave. During a brief chase in which he was pursued by the resident and another, authorities said Kelley telephoned his father to say he was shot did not believe he was going to make it.

Kelley was found dead shortly after from a self-inflicted gunshot wound.

The Air Force acknowledged Monday that an error on its part allowed the military veteran to purchase a firear. Kelley received a bad conduct discharge following a domestic abuse conviction the Air Force was required to disclose to the FBI.

It did not, allowing Kelley to circumvent a legal restriction preventing those convicted of domestic abuse from purchasing guns.

Kelley, 26, arrived at the First Baptist Church in Sunday dressed in black tactical gear and wearing a ballistics vest. He was carrying what authorities said was an "assault-type rifle". He opened fire, killing his victims, many of them children; and some at point-black range.

Authorities are currently trying to gain access to his mobile phone the FBI acknowledged it is currently unable to do.

"We will get into that phone," said special agent Christopher Combs.

The phone has been sent to FBI academy in Quantico, Virginia, he said.

Authorities have not determined a motive for the shooting but there is no reason to believe Kelley’s attack was motivated by religion or political beliefs, added Freeman Martin, the regional director of the Texas Department of Public Safety.

He earlier said there was a “domestic situation” in the family and Kelley sent threatening text messages to his mother-in-law.

Officials said 23 victims were found dead inside the church, two died outside the church and one died at a hospital. Twenty victims are being treated at local hospitals.

The victims at hospitals range from 5 - 72 years old. The youngest killed at the church was just 18 months old and the eldest was 77. Ten victims remain in critical condition, Martin said.

Among the dead were eight victims from one family, a grieving relative told The Washington Post. That relative said the victims included an infant.

Authorities had initially resisted to name the suspected shooter on Tuesday, saying they want to deny mass shooters the glory they say they are seeking.

“We do not want to glorify him and what he has done,” Martin said.

The shooting occurred about a month after a gunman killed 58 people at a concert in Las Vegas, Nevada, and on the eighth anniversary of a deadly shooting in 2009 that killed 13 in Ft. Hood, Texas, about 150 miles north of Sutherland Springs.

This latest shooting now holds the somber distinction as the deadliest at a house of worship in U.S. history.