According to President Trump, the US and Israel will work out understanding on issue with today's meeting laying the groundwork for a one-state solution 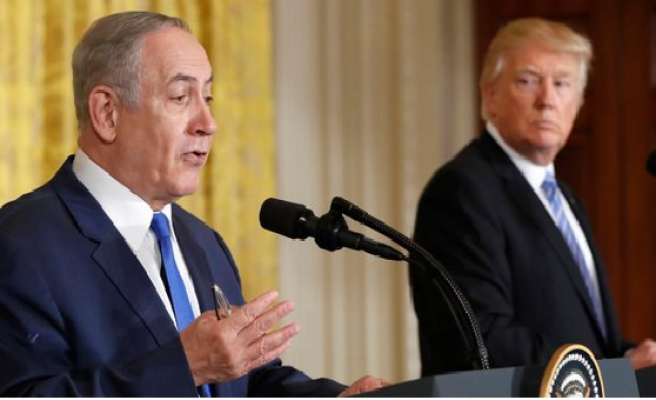 President Donald Trump on Wednesday asked his Israeli counterpart to "hold back on" building Jewish-only settlements on occupied Palestinian land in order to allow peace talks to advance.

Speaking during a joint press conference with Benjamin Netanyahu before going into private discussions, Trump said the U.S. and Israel will work out an understanding on the matter, but he wanted "to see a deal be made", likely referring to an elusive peace.

But breaking with decades of American policy, Trump said he would be okay with a one-state solution to the Israeli-Palestinian conflict, which could result in the loss of the state Palestinians have been seeking to establish.

"I thought for a while the two-state looked like it may be the easier of the two but honestly, if Bibi and if the Palestinians -- if Israel and the Palestinians are happy, I'm happy with the one they like the best," he said.

The two-state solution has been pursued, ultimately fruitlessly, by successive American administrations regardless of which party held the White House.

Trump and Netanyahu are expected to discuss a host of thorny issues during their meeting, including the peace process, the Iran nuclear deal that Trump called "one of the worst deals I've ever seen", and the potential relocation of the U.S.'s Israel embassy from Tel Aviv to Jerusalem.

Trump said he would "love to see that happen", referring to the embassy move.

Should Washington move its diplomatic headquarters, that would signal its acceptance of Jerusalem as Israel's capital -- thereby enflaming tensions with the Palestinians who are seeking East Jerusalem as the capital of their state.

Trump also reiterated calls for the Palestinians to recognize the state of Israel.

Palestinians acknowledged the state of Israel more than 20 years ago, but since 2007, Israel has called on Palestinians officials to recognize Israel as the “Jewish state” – a demand shirked at by Palestinians in part because it could nullify the right of return for refugees who fled successive wars since 1948.