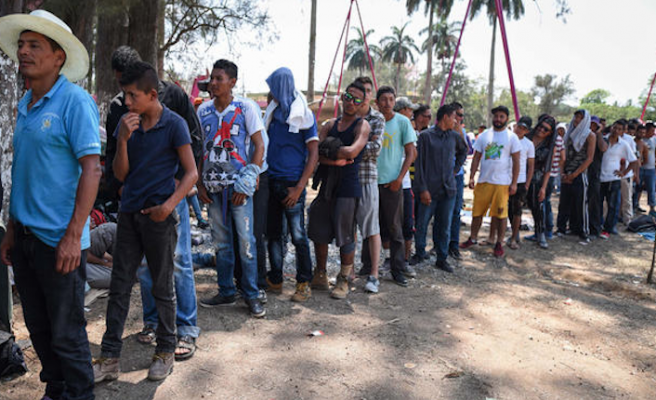 U.S. President Donald Trump threatened to close the country’s southern border Monday and urged Mexico to deport migrants who entered that nation in hopes of getting into America.

"Mexico should move the flag waving Migrants, many of whom are stone cold criminals, back to their countries. Do it by plane, do it by bus, do it anyway you want, but they are NOT coming into the U.S.A," Trump said on Twitter. "We will close the Border permanently if need be. Congress, fund the WALL!"

The tweet followed a clash between U.S. Customs and Border Patrol (CBP) and migrants who gathered on the Mexican side of the border in Tijuana.

On Sunday, the CBP closed the port of entry in San Ysidro, California, as migrants demonstrated on the Mexican side and some tried to breach the border.

The agency said migrants were throwing projectiles at border agents, and in response authorities fired tear gas because of the "risk to agents' safety."

Thousands of migrants have been waiting in Tijuana to cross into the U.S., many from a caravan that drew national attention and prompted Trump claim without providing any evidence it was an "invasion" and among the migrants were "criminals and unknown Middle Easterners."

Border security has been tightened as well, with 7,000 military troops sent to secure the southern border and harden ports of entry.

The president issued a restraining order in early November to bar migrants from crossing outside designated ports of entry, however, the order was blocked by a federal judge in California.