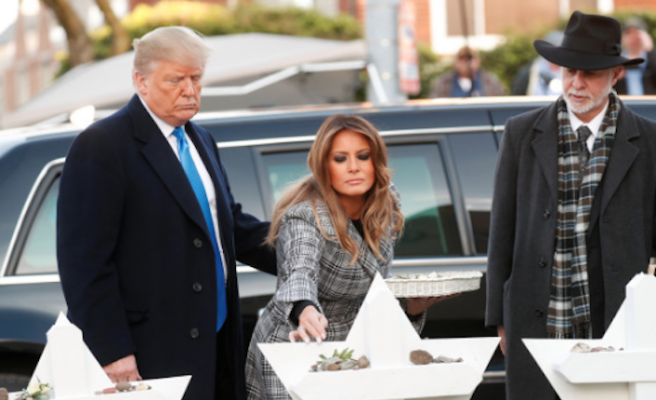 U.S. President Donald Trump traveled to Pittsburgh on Tuesday to pay his respects to the victims of a mass shooting at a synagogue that left 11 dead.

He arrived with first lady Melania Trump as well as his daughter Ivanka and her husband Jared Kushner as around 1,000 people attended the first of many funeral services for those killed in the massacre.

Trump and the first lady placed stones from the White House on the 11 memorials for the victims. He also visited a hospital where the injured were being treated.

"I’m just going to pay my respects," Trump told Fox News on Monday. "I’m also going to the hospital to see the officers and some of the people that were so badly hurt. So -- and I really look forward to going -- I would have done it even sooner, but I didn’t want to disrupt anymore."

On Saturday, a gunman opened fire during a ceremony at the Tree of Life Synagogue in the state of Pennsylvania. In addition to the 11 dead, six others were injured, including four police officers.

Police named the suspect as Robert Bowers, 46, who used the social media site Gab.com to post anti-Semitic rhetoric, saying "Jews are the children of Satan".

“In the 19 days before Bowers carried out his act of mass murder, he posted or reposted memes and comments at least 68 times.”

Many of them were “anti-Semitic conspiracy theories that have long been in circulation among neo-Nazis and white nationalists,” the center said.

Trump's visit came under fire from the Jewish community of Pittsburgh, who wrote an open letter telling him to stay away.

"President Trump, you are not welcome in Pittsburgh until you fully denounce white nationalism," it said.

While Trump offered condolences to the victims, he has yet to denounce white nationalism, which many believe to be the motive for the attack.

While in the city, local leaders, including Pittsburgh Mayor Bill Peduto, refused to meet with him.

Trump was met in Pittsburgh by thousands of protesters who objected to his visit and took to the streets, accusing him of inciting hateful rhetoric that led to the shooting.

They chanted Jewish prayers and sang songs while holding up signs saying "Trump sows Hate" and "Be a Leader".